How Najib lost hands down to Lee Hsien Loong 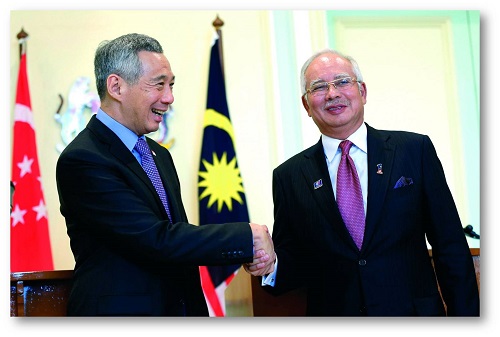 After losing to Indonesia on anti-corruption drive due mainly to the 1MDB saga, now Malaysia has lost to Singapore in the battle of faith and truthfulness when measuring the 1MDB scandal against the 38 Oxley Road Lee family saga.

While Singapore’s prime minister, Lee Hsien Loong, has won widespread praise for his handling of what many believe should have been kept a private family matter, Malaysia’s Prime Minister Najib Razak did not tackle the 1MDB issue in good faith, said the South China Morning Post.

Accused of abusing power, of persecuting them and of using the local media to muzzle their voices, PM Lee stood in Parliament and apologised for allowing the matter between him and his siblings to drag into the public arena.

He later said the Parliament has absolved him of the accusations made by his family members, but it is the sincere apology that really won the day for the Singaporean PM.

That is not the same with Najib, who has banished the 1MDB issue from being raised in Parliamentary questions while local printed newspapers – that are pro-government – gives a very different view of the scandal of the century.

Here is a recall of events that surrounded the 38 Oxley Road saga, compared to the 1MDB scandal:

The Lee siblings launched a tirade against the Singaporean Prime Minister. The latter responded quickly, denying their accusations and in turn made serious accusations against them.

This gripped Singaporeans who were either shocked or amused to see the Lee’s tearing themselves apart.

The bickering continued for days with both parties now dragging other members of the illustrious Lee Kuan Yew family into the doldrums of a nasty public spat never seen in the tiny republic state.

When it became clear the country was divide into two groups, one supporting the demolition of LKY’s house and the other backing the PM on his reticence to do so, the PM decided to push the war further.

He went to the Parliament to show his ruse, and he won the praises of the entire world – a world that was gripped to the drama on their mobile sets.

He came out the victor in this round.

The 1MDB story is really about a jailed former banker and a lone British journalist who together broke a story that shook the world and unraveled the biggest financial scandal of all time.

And the main persona in this scenario is the Malaysian Prime Minister Najib Razak.

It was 22 June 2015, that Xavier Justo, a 48-year-old retired Swiss banker, was arrested by the Thai police charged with an attempt to blackmail his former employer.

He was treated like a drug cartel boss, with armed special police force guarding him at a press conference that will become iconic since this is where the 1MDB saga became viral.

With the breaking story on the money trail – money siphoned from the 1MDB by corrupt officials – Najib became the main accused in Malaysia with part of the money traced to his account.

He used every ounce of his power to obstruct investigations into the scandal – a charge he denies.

But the man at the centre of the intricate swindle depicted in the US lawsuits is an adviser to Najib and is known as baby faced Jho Low.

According to the DoJ – is accused by the US of masterminding the theft of $2bn from 1MDB, which was sent to bank accounts in Switzerland, Singapore and the Virgin Islands.

Pressed to admit that his responsibility for the scandal, Najib preferred to turn the situation in his favour using secrecy and other acts to bar a crucial report from being circulated.

He refused to apologise and is still pressing on walking about as if nothing has happened, thinking in his own mind that Malaysians will soon forget about the 1MDB issue, an issue which he said is one that is closed and forgone as far as he is concerned.

But this attitude has damaged his reputation – not only locally but also on the global stage – and it reflects on Malaysia’s currency that has gone volatile since then while the capital outflow and a weak local stock market are contrary to what Lee has achieved.

However, Najib is certain in his beliefs that he still has the support of the poorer Malaysians – which forms part of the ruling Umno party’s voter bank.Follow us on Social Media