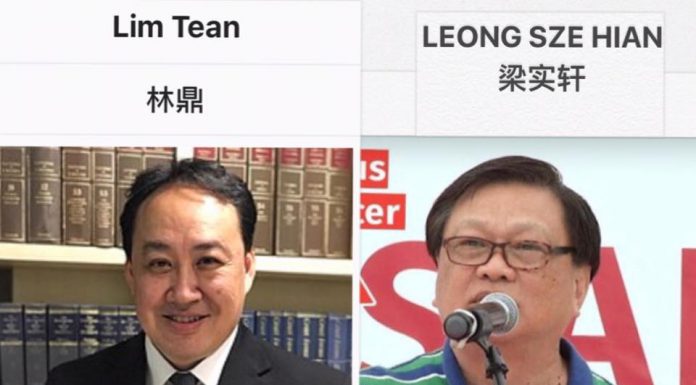 Their meeting, or discussion, is titled, ‘Will the Singapore Opposition make a breakthrough in the coming GE?’.

Set to be held on Sunday, August 25 at the Kuala Lumpur Selangor Chinese Assembly Hall (KLSCAH).

A Facebook post by Mr Tan read, “Mr Lim Tean is a Singaporean opposition politician and a lawyer. He is the founding leader of People’s Voice, the 11th political party in Singapore, and previously served as Secretary-General of the National Solidarity Party from 30 August 2015 to 18 May 2017. His various video broadcasts are very well received in Singapore.

Mr Leong Sze Hian is undoubtedly one of the most recognised names amongst netizens in Singapore. He was President of the Society of Financial Service Professionals, an alumnus of Harvard, and author of four books. Currently being sued by the Singapore Prime Minister. He is an effective and engaging public speaker”.

Tan Wah Piow, a lawyer and Singapore exile based in London will also moderate the event.

While the event is likely held in Malaysia because of Tan’s inability to come into Singapore due to his exile, many also suggest that it is held in Malaysia to mimic Tun Dr. Mahathir bin Mohamad’s political coalition, Pakatan Harapan. According to an announcement on the SDP’s website, several opposition parties that were present, welcomed the move.

Some of the parties present there were the Reform Party, National Solidarity Party, Democratic Progressive Party and Singaporeans First Party.