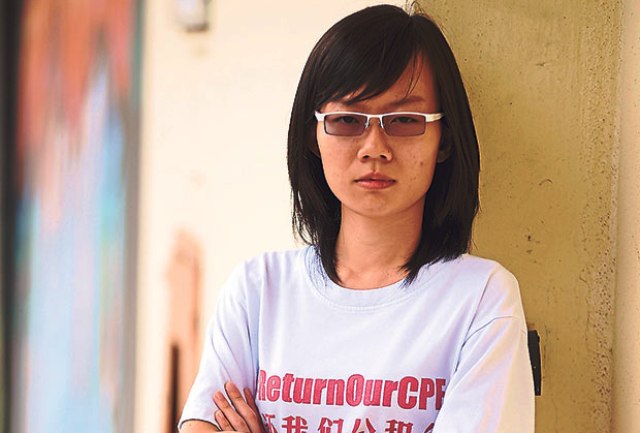 According to socio-political commentator Leong Sze Hian, Han Hui Hui has left Singapore to seek asylum in an European country. Ms Han who contested in the 2015 General Election as an independent candidate was recently flagged by the Attorney General’s Chambers (AGC) for making scurrilous statements on social media in contempt of court. She later apologised and removed the statements.

Ms Han was formerly a Malaysian, and was granted the Singapore citizenship in 2010. The public took notice of the her after she got embroiled in a dispute with the Council of Private Education. But she rose to prominence only after championing the CPF protests she organised with co-activist Roy Ngerng. At one such protest in September 2014, Ms Han, Mr Ngerng and four others were arrested for organising an illegal protest and for causing a public nuisance. She was duly convicted and fined for the offence.

“I grew up in Singapore and went through their education system. In 2008, I went to college and started a blog. In my blog I talked about the education system and questioned why we are taking so many exams and what the exams are for. Later in 2010, I had my first lawsuit for criticising the education system. Initially they started off by sending school lecturers and school CEOs to sue me for defamation, but they lost. Then in 2013, the government couldn’t take it anymore, they used taxpayers’ money to sue me for defamation. The case was set aside by the court because it is wrong due to freedom of speech. The suit ended in 2013 when the government offered me S$20,000 and the issue subsequently died down. All this is because I exposed degree mills in Singapore. Many foreigners are using degrees they bought from degree mills to get jobs in Singapore while Singaporeans are having a hard time getting jobs.The issue was a hot topic in August 2013 but it died down and recently, it became a hot issue again due to rising unemployment.

Singapore has many new citizens. In Singapore, about 70,000 people are jobless and yet they (the government) accept more than 10,000 new citizens every year. It started in 2001 with 10,000 new citizens and then it increased up to 20,000 annually over the years. In November 2013, I organised an event on education and every month after that, I organised different events. We also organise trips such as a trip to Norway to find out about their education and political systems but not as a group because we are not allowed to form non-governmental organisations (NGOs) that are not pro-government.” – ’10 things about: Han Hui Hui, the Singaporean social activist’, Malay Mail Online, 31 May 2015

In February this year, Ms Han alleged that the Singapore Prisons Services mistreated her when she was in the prison lock-up during her temporary custody for the hearing of the CPF protest. The Ministry of Home Affairs later dismissed her allegations of prison treatment as ‘baseless and false’.

Several international human rights organisations, like the International Federation for Human Rights (FIDH), had called on the Singapore Government to stop the “judicial harassment” against Ms Han.

Mr Leong did not disclose at which European country Ms Han will be seeking asylum in but he said that he wishes her well. He described her as “the bravest girl that I have met and she “fights” in ways that we never would have imagined.”

If Mr Leong’s is right, Ms Han would be the second person to seek asylum in recent times. In December last year, teen blogger Amos Yee sought and was eventually granted asylum in the United States of America.Follow us on Social Media