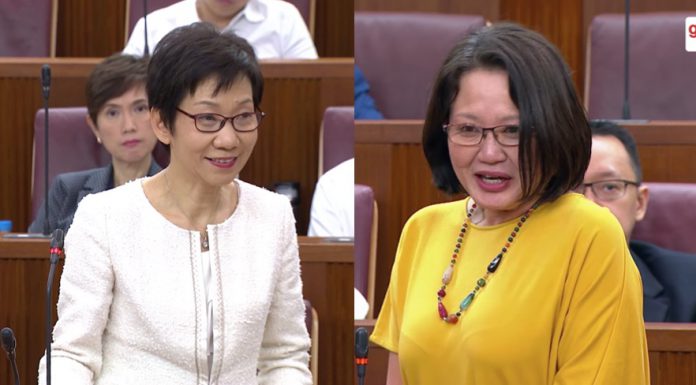 Leader of the House, Grace Fu, has issued an ‘apology notice’ to another Workers’ Party member of parliament, Sylvia Lim. Ms Fu’s notice is the second one of a similar kind issued to opposition parliamentarians in as many months. In January 2018, Ms Fu asked non-constituency MP Leon Perera to apologise for misrepresenting the facts and misleading Parliament at a sitting of the House in November 2017.

This time, Ms Fu (who is also the Minister for Culture, Community and Youth) asked Ms Lim to withdraw her “allegations” that the government had “floated test balloons” about the Good and Services Tax (GST) hike coming between 2021 and 2025.

Ms Lim stood her ground and refused to retract and apologise for her comments, even when she was pressed by the Finance Minister as well as the Home & Law Affairs Minister.

She asked: “I clearly said that it was my suspicion…it’s my honest suspicion, am I not entitled to have a view?” Ms Lim’s boldness in the House has earned her the praise of Singaporeans, for not cowing to “intimidation tactics”.

Ms Fu in giving Ms Lim a Thursday deadline (by the end of Parliament’s sitting for the Committee of Supply debates) to withdraw her “allegations”, said: “Ms Lim was suggesting that the Government would have raised the GST immediately, if not for the adverse public reaction when it ‘floated’ the suggestion late last year, and if it had not been ‘stuck’ with a previous statement that it had ‘enough money for the decade’. Ms Lim was in effect accusing the Government of being untruthful when it says that it had planned ahead, and that its proposal to raise the GST between 2021 and 2025 was the result of such planning.”

It is unclear how Ms Lim will respond to the charges against her by the Leader of the House. But WP’s Leon Perera eventually apologised for claiming Mediacorp edited Parliament video. He however maintained that he “did not deliberately misrepresent the facts of that incident to this House.”

Socio-political observer Leong Sze Hian had previously condemned such notices to apologies. He said: “only a free and unfettered debate in Parliament can ensure that policies are subject to comprehensive and diverse review, on a continuing basis.”

In 1986, the former chief of Workers’ Party JB Jeyaretnam (JBJ) was referred to the Parliamentary Committee of Privileges for refusing to apologise for alleging in the House that the Government influenced the judiciary.

In what was described as the ‘longest verbal battle’ lasting two-and-three-quarter hours, the late opposition stalwart refused to apologise to then-PM Lee Kuan Yew. Despite repeated demands by Mr Lee, JBJ held that the Government had a hand in the transfer of a former district judge.

Mr Lee later referred to JBJ’s allegation as a ‘smear’ on the government and described JBJ as a “dishonorable man” who refused to apologise for the grave mistake he made.Follow us on Social Media