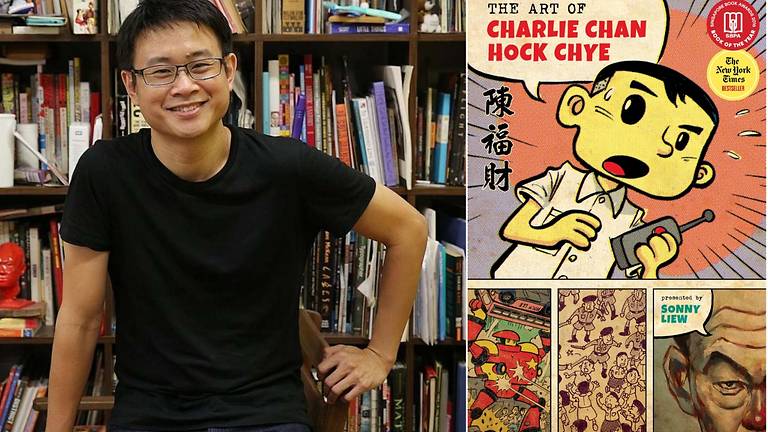 Sonny Liew has become the first Singaporean to win the Eisner Awards – the comic industry’s equivalent of the Oscars for film or movies. The artist received the most number of nominations for the 2017 Will Eisner Industry Awards (Eisner Awards) held in San Diego on Saturday morning (Jul 22) during the Comic-Con International.

He won for Best Writer/Artist and Best US Edition of International Material – Asia for his graphic novel The Art Of Charlie Chan Hock Chye at the prestigious event. The event is ongoing and Sonny is in the running for 2 more awards.

The Art of Charlie Chan Hock Chye was first published in Singapore by Epigram Books in 2015 and partly due to the controversy over the fund withdrawal by the National Arts Council (NAC) quickly sold out and several reprints had to be made.

Now published in the US by Pantheon Books, the book chronicles the life of a fictional Singaporean who lived in the 1950s to present day Singapore, against a back drop of real political events and political figures in Singapore’s history.

The NAC had, in 2015 when the book was first released, explained that the book “potentially undermines the authority or legitimacy” of the Singapore Government and withdrew funding for the work.

A spokesman for the NAC said at the time: “We had to withdraw the grant when the book The Art of Charlie Chan Hock Chye came out because its sensitive content, depicted in visuals and text, did not meet our funding conditions.”

Since then, the work has gone on to win the Singapore Literature Prize and the Singapore Book Award’s Book of the Year 2015; and was also named in various international publications’ must-read list, such as The Economist, The Washington Post, and Publishers Weekly.

In 2015, Mr Liew, a Malaysian-born-Singaporean, told the TODAY newspaper why he did the book:

“I was trying to meet the challenge put forth by the PAP (People’s Action Party) that someone without a stake in the country, who could run off at any time, shouldn’t be offering critiques of Singapore, which I knew this book would be doing at some levels.”