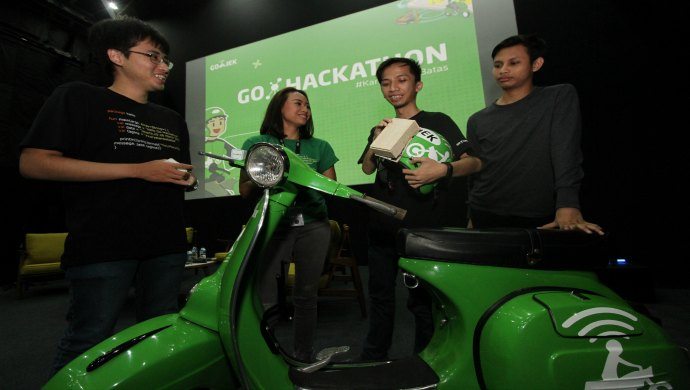 Go-Jek hosted its first hackathon event Go-Hackathon from February to late March, attracting 415 applicants from all over Indonesia

Indonesian ride-hailing startup Go-Jek today revealed the three winners of its first hackathon Go-Hackathon at their headquarter in Jakarta.

The three teams managed to beat the 36 other finalists at the final round held on March 25 and 26, following the competition that was held from February to March.

Go-Jek said that the event has drawn 415 applicants from across Indonesia. Fifty per cent of teams submitting their work originate from provinces outside of Java island, such as North Sumatra, Bali, Gorontalo, South Celebes, and Borneo.

The background of the participating teams varied from high school and university students to professional developers.

In a press statement, Go-Jek Indonesia HR Director Monica Oudang said that the judges were having difficulty in deciding the winners due to the quality of the shortlisted teams.

Five of the best works in the competition are available on the Go-Hackthon Github platform.

“Through an open-source-based technology that can be utilised by different parties, we believe that the best technology coming out of Go-Hackathon will have a greater positive impact for the Indonesia society. So that everyone can use their works to set up a service, programme, or application that can help solve everyday problems,” Oudang said.

These are the three winners of the Go-Hackathon:

First Winner: SAILLY
The SAILLY team consist of three students of Bandung Institute of Technology (ITB). The team members developed a tracking service called Go-Track, which utilises Bluetooth technology to track “things that are missing or left behind on the road.” The platform is able to function without internet connection and is powered with a battery that lasts for one year.

Second Winner: SSX_Ceria
The SSX_Ceria develops an internet of things (IoT) device that was inspired by Go-Jek’s own logo: A motorbike taxi driver with Wi-Fi signal popping out of his head.

Their product Caprica is a smart helmet that integrates “protection, data-gathering, and comfort” through its three main features: An SOS alert that will contact an ambulance in case of accidents; a Bluetooth speaker that enables Go-Jek drivers to communicate with its customer; and a speed warning system that is connected to user’s motorbike accelerator through GPS.

The team won a Macbook Pro for each team member.

The two team members of Quantum Sigmoid are graduates of Bogor Agricultural Institute (IPB), and each of them won a Google Pixel.