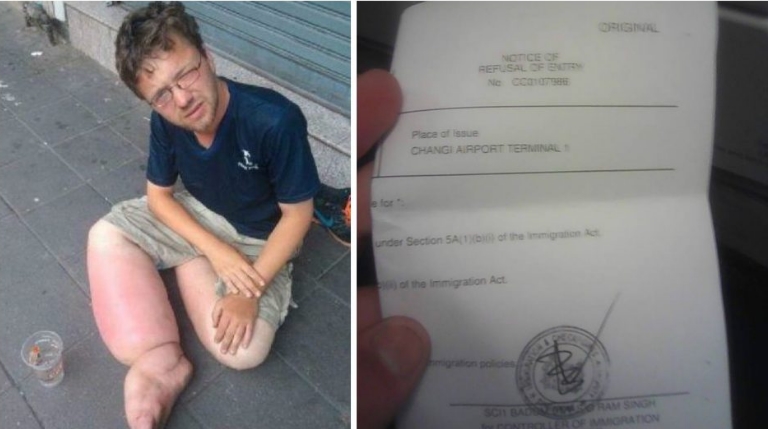 Professional panhandler of international repute, Benjamin Holst, was denied entry into Singapore. The 32-year-old adventurer who suffers from macrodystrophia lipomatosa (an ailment that left his right leg supremely swollen), first rose to notoriety in 2014. Holst told a sad tale of how he had lost his money and wallet and ended up begging in Bangkok, only to have the public donate over $2,000 to him.

The sympathy he earned from the Thai public also won him a ticket back to Germany. But he spent all the money in Pattaya, drinking and partying away. He then started begging again at Pattaya beach, but was promptly deported by the Thai authorities.

Before heading to Malaysia, Holst was in Singapore, visiting places like Geylang and Chinatown.

And said he enjoyed sightseeing in Chinatown, Sentosa and Marina Bay while he was here.

Go in the Lion for fun(:

He went back to Malaysia after this and tried to re-enter Singapore via the Woodlands checkpoint where he was denied entry. He had planned to visit the red light district in Geylang again.

Singapur dont let my fly to europe lost my fly ): send me back to Malaysia ):

But that did not deter him. Holst went to KL and tried to fly into Singapore. But he was again denied entry into the country.

Go back to KL

Holst claimed that the authorities in Singapore paid for his flight to Denmark – a claim that is not verified.

Singapur immigration deport me to Denmark all ok

But it is all good that he did not get into Singapore. He is enjoying like with cigarettes and marijuana.