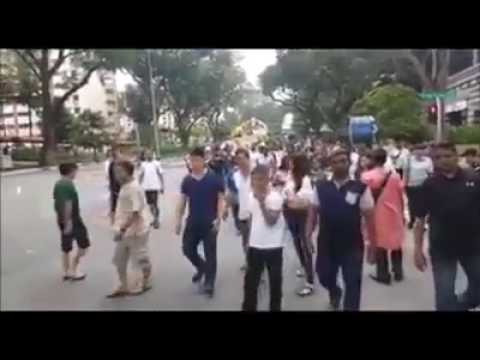 Members of the 369 gang shouting their party name at a funeral in Kim Tian Road (near Bukit Merah) has gone viral.

It is unclear when the incident happened by it was first uploaded by a netizen named Joey about 15 hours ago.

Danny Ng who commented on a Facebook page discussing the video said: “It’s a funeral procession for one of the gang member. I attended one of my relative funeral some years back, many members came to pay last respect without fear even knowing some detectives for secret society branch watching over them from afar. They carried the deceased coffin for a long journey & shouting the gang code. As long as you don’t break the law, what can the police do?”

According to blogger Dick Yip, this is the brief snapshot of the 369 gang in Singapore.

“Many of our people, especially those involved in gangs, do not know how secret societies started out. This has led to a lot of mambo-jambo, mish-mash and diluted understanding about the structure of organised crime resulting in all kinds of street gangs, mall gangs, coffee-shop gangs, etc..sprouting forth. The public at large also do not know much about the past or present gang situation in Singapore.

There were several major gangs in our island before and just after WW2. These included the 08, 18, 24, 36 and 108 among others. The 18 or ” chap pueh” tong was one of the active ss gangs. All the gangs controlled different sectors and areas of our island. There was no strict line of division, only a tacit understanding which was often broken owing to intense power struggle, greed and uncontrollable rebels within a gang.

Some sectors were so lucrative that several gangs fought over it constantly resulting in “turf wars” or more commonly ” inter-gang warfare” or rivalry. These gang clashes happened often in the past but mostly over territory and control over illegal activities of gambling dens, drugs, the sex trade, smuggling, extortion etc..not so much as today’s so called senseless ” staring” incidents.

Some younger rebellious members of the original 18 group left the parent group to form a new ss group calling themselves 369. This was sometime in the early 1960’s. They picked the numbers 369 to show that they were still affiliated to the parent group…the 18…by historical link.

But that was as far as they were prepared to go – just a link.

As the years passed, they allied themselves to other groups to be stronger and survived.

They became very active in the late 60’s and 70’s, taking on a new image. They became one of the most VIOLENT gangs that had a bad reputation for attacking the territory of others.

Almost all of the other secret society gangs only took in Chinese as members. But the 369 was the first local Chinese gang that took in other races…Malays, Indians.

Due to their relaxation policy, their strength quickly shot up in the 1990’s. They became a major concern for our police and gang busters soon after. They dealt mainly in drugs, prostitution, and illegal VCDs. Because of their ‘strengths’ in numbers, they violently attacked other rival groups…such as the 303, the Omega (malay gang), and other independent off-shoots of the 18 gang.

Also because of their popularity, many new teenage street gangs began to sprout in the mid to late 90’s calling themselves in the same way ” 369″. Most of these teenagers from such gangs, are street hooligans and thugs, mostly hot-air balloons.”