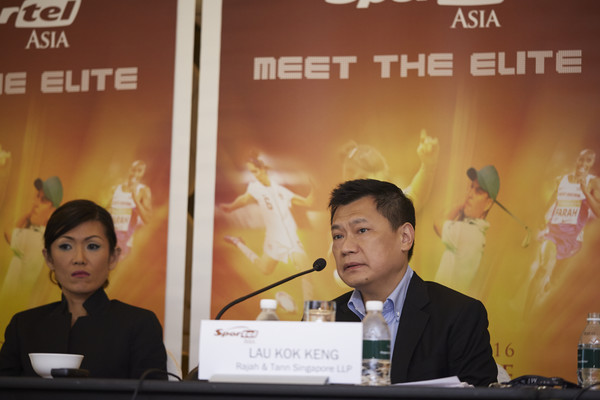 WHERE’S the ‘Kallang Roar’ of the iconic era of the 1970s and 80s? The conspicuous absence has had the football fraternity clamouring for change the past three decades.

And one die-hard Lions fan eager to see the roar return to the SportsHub is Lau Kok Keng.

The “L” in his surname Lau not only reflects his profession as a lawyer but it significantly smacks of the ferocious roar because he’s a lion-hearted football fanatic who, five years ago, started the “Legion of Lions”.

Kok Keng, as he’s popularly known to friends, rounded up several former Singapore skippers to advice the Football Association of Singapore (FAS) and also produced the “50 Greatest Moments in Singapore Football” book – the first of its kind for any sport in Singapore. It served as a vehicle for a nationwide schools outreach programme for aspiring young school footballers – boys and girls.

He has a very big roar as his professional and sporting credentials are the right formula for a FAS (Football Association of Singapore) Deputy President candidate, when elections are held on April 29 – the first time it is done democratically in Singapore in over 30 years.

He is one of the key players in the “Game Changers”, a refreshing alternative team, spearheaded by Hougang United chairman Bill Ng in a 15-member slate.

Kok Keng, straight from the record books, is a veteran lawyer with Rajah & Tann Singapore LLP, and head the firm’s Intellectual Property, Sports & Gaming practices. He has worked on legal matters with various local and regional stakeholders, including SportSG, Singapore Pools, FIFA, UEFA and the Asian Football Confederation (AFC).

He’s one of the rare Singaporeans who act as arbitrators with the Court of Arbitration for Sport, an international body established to settle sports-related disputes through arbitration.

From 2012 to 2015, he was Vice Chairman of S-League Geylang International and also served on various FAS sub-committees, including the Captains Advisory Panel (CAP), Singapore Masters 9s and Football Heritage Project.

Top of his cap was also as SportSG’s appointee to the Football Task Force, established in 2013, jointly by SportSG and FAS to chart the future of Singapore football.

He declares: “In short, I’ve for some time been a serious and sincere contributor to Singapore football, not just as a legal advisor, but also as an administrator and official, but always as a volunteer with no hidden agenda.”

Change is a six-letter word close to Kok Keng’s head and heart and he relishes the return of the famous “Kallang Roar” to overtake the solace Singaporeans now feel  for foreign football leagues, primarily because of a recent waning interest in the S-League.

“Having the right people lead the administration of the sport is the starting point towards a brighter football future,” he says.

“But equally important is the support that the stakeholders provide to those elected to lead the FAS. In a country that is still at a very developmental stage in terms of having a sporting culture, the role that the state plays in supporting sports cannot be over-stated.”

Recognising the past heroes is critical in motivating the future generation, he reiterates.

By showcasing the “50 Greatest Moments in Singapore Football” in a coffee-table book was the “perfect salute to the players, coaches and officials”.

Kok Keng adds:  “Even the 2010 YOG (Youth Olympic Games) team was featured. We had hoped that by giving recognition in print for their efforts, the retired players would continue to contribute to the game in their own special ways, while the current players would be motivated to continue to play good football and with pride and passion.

“For those aspiring to pursue football as a career, the recognition that current and former players get for their efforts and sacrifices for the game will be a factor that determines if it is worthwhile following the same path.

“Financial rewards are not the sole determinant of whether people choose to be in the football industry. Recognition is equally important, and that is something we need to institutionalise here.”

Kok Keng’s longer-term is to get football back on good tracks.

Be it in selecting its leaders and partners, allocating financial, infrastructural and technical resources, or taking bold decisions and directions towards ensuring that the development of the sport is not hindered by obstacles that can be overcome so long as there is a will to do so.

He warned that it will not be a proverbial bed of roses after the April 29 FAS elections. He explains: “It will no doubt be a long and arduous road ahead post-elections. Things cannot change overnight, but progress must be demonstrated along the way, even if the benefits may only be fully realised many years later.”

His final word: “The key stakeholders must recognise that football is a sport like no other in its ability to unite the community, promote social integration and harmony, and elevate national pride, and that because of these unique qualities, it ought to be given all necessary support the sport may require in order to grow and reach its fullest potential.”

It must be done. And he hopes the “Game Changers” will set the right future football benchmarks.

‘Game Changers’ is led by dynamic businessman Bill Ng and the refreshing alternative team of 15 football-hearted personalities will be contesting the FAS elections on April 29 at the SportsHub.