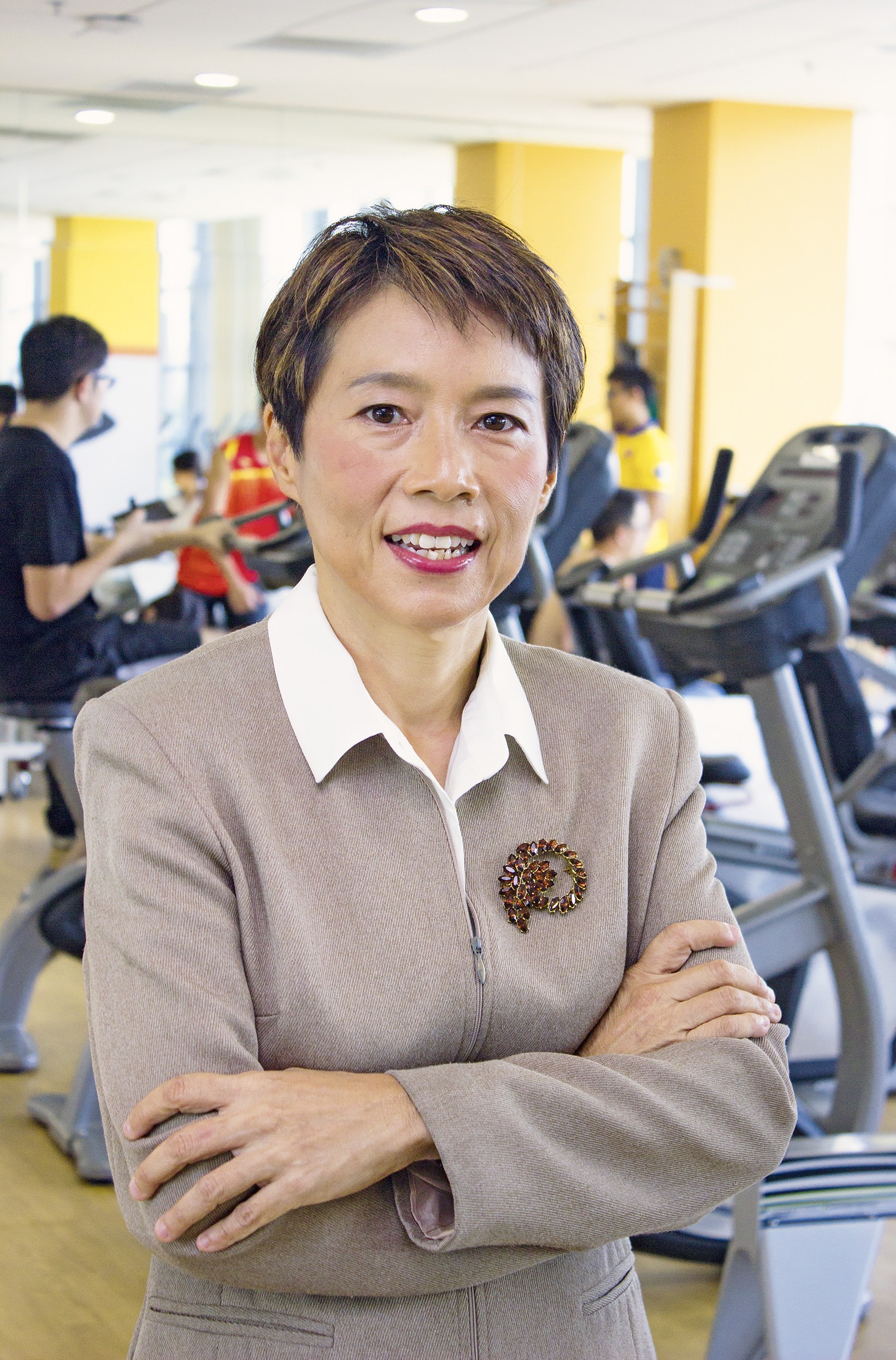 SHE wants to give a refreshing injection into football, to have a better structured and coordinated effort among stakeholders, to bring the benefits of medicine and science to the football community, within the next four to eight years.

Her quick thoughts of areas of improvement at the Football Association of Singapore (FAS) are: Medical education and protocols for sports injury prevention and surveillance, safety, and management; Access to quality medical care for players; Performance enhancement through sports science and doping issues in sport

“This would need an understanding of existing ground and practical issues, working in partnership with the FAS executive staff, FAS Medical Committee, stakeholders in football such as managers, coaches, players, and medical and sports science professionals in the field to fill up any gaps that exist,” says Dr Teoh Chin Sim.

She seriously talks with a medical heart, holding a Masters in Sports Medicine (Honours) from Alabama, United States of America in 1994, and for the record, she rocked the local record books to be the first female Sports Medicine specialist in Singapore.

But at first sight, you doubt her high-preaching medical capabilities. A quick first impression of Dr Teoh: She’s small in size but after spending a few minutes with her, you realize how big she is in medical knowledge and even more big-hearted in taking care of Singapore sportsmen and women.

For over two decades, she has been the attending team physician to Singapore’s elite athletes at major games. She was Chief Medical Officer for Team Singapore at the 1994 Commonwealth Games, 2006 Asian Games, 2012 Paralympic Games, 2014 Asean Para Games and 2014 Youth Olympic Games.

She also officiated as FIH (Federation of International Hockey) medical officer to the prestigious 1999 Champions Trophy and pre-Olympic qualifiers for Sydney 2000. Her most recent appointment was as Chief Medical Officer for Team Singapore at the 2015 SEA and Asean Para Games.

Dr Teoh is presently Director and Senior Consultant of the Sports Medicine Centre in Khoo Teck Puat Hospital. And now set to bring a new sports-science perspective to the FAS (Football Association of Singapore) in contesting in “Team Game Changers” as a Vice President candidate, under Bill Ng.

“She says: “I joined ‘Game Changers’ after due consideration because of two reasons.  People matter to me because I’m surrounded by people all day and I need to work with them as well as serve them and meet their needs. They are the reason why I exist.

“Firstly, Bill Ng and Annabel Pennefather in their approach to me came across as people who are genuine, sincere and serious about wanting to improve Singapore football. They also listen intently, with respect and humility. These qualities are important in the leaders with whom I work and serve.

“Secondly, because of what I think I could contribute to the GC Team in its effort to improve Singapore football in the areas of enhanced access of footballers to quality medical care, optimising soccer performance through sports science and raising sports safety standards.

“Having had the privilege and experience over the past 25 years of working with medical professionals, administrators, coaches, physiotherapists and players themselves on the ground in football, I’ve garnered a fair bit of feedback about their areas of care and concern.

“In my own ways in the past and present, I’ve endeavoured to assist, acting as a bridge sometimes, or helping them directly. Being a “team person” often needing to coordinate, persuade and get the buy-in stakeholders and colleagues, I hope to bring together people to work in a synergistic manner to better serve our football community.”

Dr Teoh, by virtue of her childhood sports-bonding with her late Malaysian military-officer dad, advocates the importance of how an active and supportive family can contribute to the sporting culture that is handed down from one generation to another.

“Just look at football in Fandi Ahmad’s family and swimming in the Quah family,” she says. “Family involvement shows a child how his or her parents and extended family that they care. This care can and has evolved sometimes into the parents themselves learning about the sports and taking up the sport, even becoming sports administrators, coaches, and sports trainers. Good examples of this are Bill Ng and Krishna Ramachadra in the ‘Game Changers’ team, too.”

Football, end of the day, is about teamwork and Dr Teoh is the perfect example of alliance and association in sports. She adds: “In my own ways in the past and present, I’ve worked hard to assist, acting as a bridge sometimes, or helping them directly.

“Being a ‘team person’ often needing to coordinate, persuade and get the buy-in stakeholders and colleagues, I hope to bring together people to work in a synergistic manner to better serve our football community.”

As a sports medicine specialist, her practice is focused on sports and exercise medicine. She works with competitive and recreational athletes and people who simply enjoy exercising. A qualified acupuncturist, she has a keen interest in the management of neuro musculoskeletal pain, and sports nutrition supplementation to optimise health and performance.

Dr Teoh is currently the Chairman of the Therapeutic Use Exemption Committee of Anti-Doping Singapore, a member of The Republic Polytechnic Institutional Review Board and Medical Commission of the Singapore National Olympic Council, former Secretary of Medical Committee of the International Hockey Federation (FIH) and Past President of Sports Medicine Association of Singapore.

In the international arena, too, she plays a pro-active role. Dr Teoh significantly lends a helping hand as a member of both Anti-Doping Committee of the International Paralympic Committee and Therapeutic Use Exemption Expert Group of the World Anti-Doping Agency. Her most recent work took her to the Rio Paralympics 2016.

In her past time, Dr Teoh volunteers in a sports playgroup for special children, runs to keep fit and scuba dives for leisure, slowing down from her competitive days in track and field, squash and the marathon.

She even provided medical coverage during the heady days of the Malaysia Cup, as well as at S-League matches later on. She was also Singapore’s chief medical officer at the 2015 South-east Asia Games.

“While I have no direct experience managing an NSA, I believe that being in touch with the ground is very important as a starting point. And this is where I hope to begin, given the opportunity,” she said, pointing to her interactions with a broad spectrum of the football fraternity from club management individuals to medical staff, players and parents from both men’s and women’s teams.

Bill Ng, a merger and acquisition specialist and Chairman of Hugang United welcomes Dr Teoh and Annabel Pennefather. He believes that there is women-synergy in his team, one that can take football to a higher level – with expertise from beyond the sport.

“Change from within is sometimes too slow and eventually this is a common cause for downfall of modern companies, corporations and big giants,” said Ng. “This may be unorthodox, but we believe in bringing fresh perspectives, hearts, and minds, like Annabel and Dr Teoh, to the team.

“With both of them taking positions in the team, I’m sure that they can contribute to Singapore football in an electrifying way. We, the Game Changers, recognise that a quick fix is not the solution here, and we had to think outside the box to look for the best qualified candidates.” biggest dream for Singapore football

Dr Teoh’s biggest dream for Singapore football: “We must work hard to have a pipeline in place to consistently place Team SG men in the top 100 in the world, the women to win a gold medal at the SEA Games and never ever stop the work towards a thriving group of special children and youths playing para football.”

And whatever profound challenges she undertakes the football-way, she will forever be thankful to her late dad, a die-hard sportsman, who distinctly played a major role in encouraging her to get a kick out of sports,  which have led her to be Singapore’s first female Sports Medicine specialist.

‘Game Changers’ is led by enterprising businessman Bill Ng and the alternative team of 15 football-hearted personalities will be contesting the FAS elections on April 29 at the SportsHub.