Singapore — A campaign to raise funds for foreign workers achieved more than twice the targeted amount of $100,000 by Sunday morning (April 12).

The campaign had been launched on Tuesday (April 7) by social media influencer and YouTube comic Preeti Nair, more popularly known as Preetipls.

Ms Nair launched the campaign with an 8-minute video explaining why she was raising money for foreign workers, among whom there has been an increase in Covid-19 cases.

At present, 70 per cent of new Covid-19 cases have involved migrant workers.

Nobody Asked Episode 15: LET’S RAISE $100K TO HELP MIGRANT WORKERS IN SG!?!?!?!?DONATE HERE: give.asia/donateplstried to break down everything that’s happening in the news with migrant workers in Singapore, but ended up with more questions than answers…but one thing's for sure, they need our help.So let’s try to raise 100k for HealthServe and Transient Workers Count Too – TWC2, organisations who directly address the immediate needs of migrant workers here. Shoutout to our migrant friend who agreed to be interviewed for this episode, and to the team behind this video @utopia.sg, @preetiplsintern. -as mentioned in the video, here are some more resources you can check out to get informed and lend help:FOR MIGRANT WORKERS:- Mutual Aid Hub – Overview of existing needs (by Theophilus Kwek):bit.ly/mutualaidhub- Fundraiser for prepaid cards and top-up for migrant workers (by TWC2):giving.sg/twc2/topup- Fundraiser for SG Accident Hub Centre (by Migrant x Me):bit.ly/migrantxme- Donor / Sponsorship (by It’s Raining Raincoats):bit.ly/rainingraincoats- SIGN THIS PETITION to Josephine Teo to protect our migrant workers from COVID-19:bit.ly/petitiontojoFOR WOMEN:- Vulnerable Women’s Fund (by AWARE):giving.sg/aware/vulnerable_womens_fund- Fundraiser for survivors of trafficking, slavery and abuse (by Hagar):hagar.org.sg/donate/

As the campaign’s donate page says, “one thing’s for sure, they need our help”.

The beneficiaries of the fundraising effort are HealthServe (@healthservesg) and Transient Workers Count Too – TWC2 (@twc2sg), both of which “directly address the immediate needs of migrant workers here”.

And while measures implemented by the Ministry of Manpower (MOM) to address the problems of migrant workers are acknowledged by Ms Nair in the video, she brings attention to vulnerable groups of foreign workers whose needs are not being met — those in dormitories but who are not under quarantine, and Special Pass holders.

For the former, since those not under quarantine will not be salaried during this time when they are not working, they have no means of supporting themselves. Nor do many of them have food allowances, and those whose meals are catered may have to pay for these at a later date.

And Special Pass holders may have no means either of providing for their needs, including accommodation, at this time either. Nor are they qualified to receive aid from the government.

There have been comments on Ms Nair’s page about the fund-raising initiative. 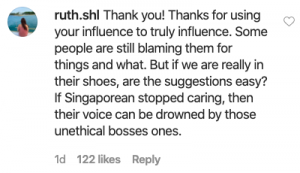 One person called the video the best Ms Nair has ever done.

Many thanked her for drawing attention to the condition of foreign workers. 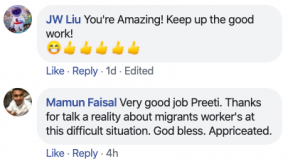 Ms Nair, as always, engaged with those posting comments on her page. 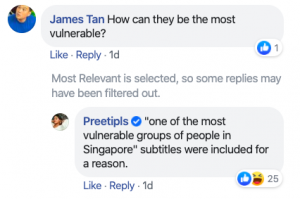