Asia Malaysia From one backdoor to another: Will the new government curb racism, allow...

From one backdoor to another: Will the new government curb racism, allow freedom of expression, and reduce Covid-19 deaths? 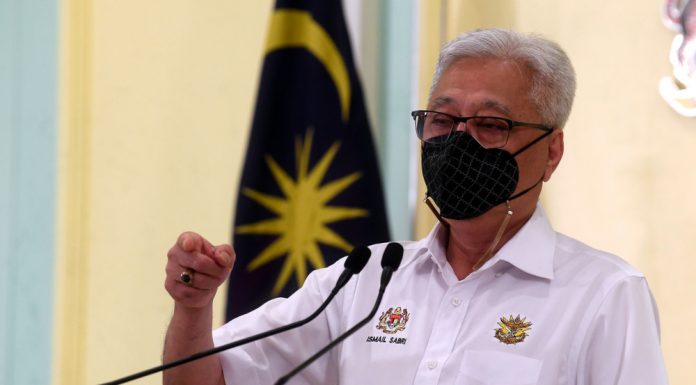 Many Malaysians are enraged and infuriated that this second backdoor government is not elected by the people. Malaysians are also upset with the mediocre level of Cabinet ministers, who in their past Cabinet positions made some amusing and controversial statements.

Malaysia — For the second time witnessed yesterday (30th Aug) another backdoor Government Cabinet was sworn in by the King.

The government voted in with the popular mandate of the people was in the 14th General Election (GE14) on 9th May 2018, Pakatan Harapan (PH) Government.

He said there should be no need for a confidence vote in Ismail’s leadership, despite the condition set by the Yang di-Pertuan Agong for the appointment of the ninth prime minister.

Analysts expressed concern about whether Mahathir is in support of the United Malays National Organisation’s (UMNO) leadership.

Today, the Cabinet is headed by UMNO, the political party which lost the 2018 general elections to Pakatan Harapan.

UMNO’s choice of 9th Prime Minister is the party’s vice-president Dato Seri Ismail, who was sworn by the King in the Palace a week ago.

UMNO is Malaysia’s longest-governing (61 years) political party reclaimed the premiership and leadership through a Barisan Nasional coalition. With Umno’s Ismail now at the helm, he sought to make UMNO more dominant, at least in terms of the number of ministers.

Many Malaysians are enraged and infuriated that this second backdoor government is not elected by the people.

The Cabinet in the previous backdoor government and in this new government is quite similar without many changes in the line, with a few swaps (exchanges) in ministerial positions. Many of the ministers have been retained from the Muhyiddin-Yassin led Cabinet.

The first backdoor government headed by Tan Sri Muhyiddin Yassin was forced to move out of office after people power, pressure, including more than 100 opposition MPs protests took to the streets.

In addition, he stepped down as a result of the mounting anger at his government’s handling of a worsening Covid-19 outbreak, with more than 12,500 Malaysians and foreigners dead.

The King stepped in to elect the Prime Minister as the election is ruled out due to the pandemic. The palace made its decision to appoint Ismail with the hope that the country’s fractious politicians would put aside their differences and focus on dealing with the country’s raging Covid-19 pandemic.

In a statement, the Prime Minister’s Office said Ismail will miss the swearing-in of his Cabinet by the Yang di-Pertuan Agong yesterday afternoon.

Malaysians are also upset with the mediocre level of Cabinet ministers, who in their past Cabinet positions made some amusing and controversial statements.

The new youth and sports ministry headed by Datuk Seri Ahmad Faizal Azumu are seen as comical in the promotion of a YouTube video on the rating of curry mee in Putrajaya.

The Women and Family Minister Rina Harun came under fire in Mar last year for its eyebrow-raising tips for wives and working mothers during the movement control order (MCO) period.

Her ministry put up a few controversial posters on its websites, one of which advised homemakers to always look appealing to their husbands. Another poster urged them to avoid nagging their spouses, but instead humour them with a Doraemon-like voice.

Meanwhile, the Universiti Malaya Students Union (UMSU) has raised doubts over the return of former higher education minister Noraini Ahmad to the same position again, citing her past failures while under the previous Perikatan Nasional administration.

In a statement released today that Ismail’s move to reinstate Noraini does not reflect his commitment towards involving the younger generation in Malaysia’s economic recovery.

University of Nottingham’s Bridget Welsh said in an interview with AFP: “People who voted for change in 2018 will not be looking favourably to his appointment, and it will be an unelected appointment,” said. “So, you will see polarisation continue.”

Ismail will have to prove that he is multiracial in his leadership, as non-Malays are upset with pro-Malay public speeches circulated widely on social media.

In 2018 polls, Ismail waved the racial card, warning that every vote for the opposition was akin to eliminating special privileges given to Malays under a decades-old affirmative action program.

In 2015, Ismail sparked a firestorm of protest over his Facebook post urging Malay consumers to boycott the monopolizing and profiteering Chinese businesses that discriminate non-Chinese entrepreneurs, arguing that it was necessary for Malays to exercise consumer power to prevent “profiteering” by Malaysia’s ethnic Chinese that control over 90% of Malaysian economies.

Then in reply, a political analyst of the Institute for Democracy and Economic Affairs (IDEAS) think tank said in his personal capacity that any Malaysian voter, regardless of race, would be repelled by Ismail’s comments.

“I think the reaction of any right-minded Malay or Chinese who believe in Malaysian unity would be disgusting. And I think, or at least hope, that the Chinese voters will remember what he said when it comes to the vote.”

The then Inspector-General of Police Tan Sri Khalid Abu Bakar stated that the minister would be investigated under the Sedition Act 1948. Ismail has since deleted the Facebook post.

Analysts warned the appointment of Ismail may also set the stage for increased politicking in UMNO as Ismail may later mount a challenge against the party president Ahmad Zahid Hamidi, who is fighting multiple criminal charges.

While other analysts said Ismail would be a poor choice as he is associated with the failings of Muhyiddin’s government and that his government is likely to remain shaky.

Meanwhile, international rights group, Human Rights Watch (HRW) has called on the new Prime Minister Ismail Sabri Yaakob to commit to respecting the rights to free speech and peaceful assembly, which it said declined under his predecessor Muhyiddin Yassin.

“Malaysian authorities over the past year have taken a very heavy-handed approach to any criticism of the government by harassing and prosecuting peaceful protesters, journalists, and activists.”

Malaysia today celebrated its 64th National Day, in a celebration filled with patriotism in the spirit of the Malaysian family. Malaysians hope and pray the new government will act to curb racism, allow freedom of expression, and reduce thousands of deaths as a result of the Covid-19 pandemic. /TISG

M.Krishnamoorthy is a freelance journalist and has been a local producer for CNN, BBC, Al Jazeera, Australian TV networks. He has also freelanced for the New York Times, TIME, Sydney Morning Herald and worked for The Star and New Straits for 35 years. He is the author of six books and his latest May 9 — People Power Saves Malaysia — Mahathir Leads the Way, was the bestseller for five months last year following the GE 14 in Malaysia. Last year, he retired as Associate Professor at an international university.