CNA released a video called “Regardless of Class” last week which went viral, as it shone a light on income inequality as the biggest cause of social division in the country. The video has since been widely watched, discussed and shared.

One netizen who chose to weigh in on the matter is former teacher Chew Wei Shan, whose response to “Regardless of Class” has also gone viral, as she questions the concept of meritocracy, admittedly a much-beloved ideal in the country, and correlates it with privilege, since the ones who have a better start in life have an unfair advantage over those who don’t. 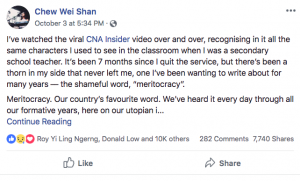 Ms. Chew writes that she stopped teaching seven months ago, however, she has long desired to write about meritocracy. “…but there’s been a thorn in my side that never left me, one I’ve been wanting to write about for many years –– the shameful word, ‘meritocracy.’

It’s a concept that she calls “our country’s favourite word.” Ms. Chew quotes Prime Minister Lee’s comment on the presidency of Halimah Yacob, “… it is amazing. It shows what Singapore is –– multiracial, meritocratic, one flag, one people. That is what makes us Singaporean. It is not just resonant rhetoric, or a warm, fuzzy feeling.”

As both a student and a teacher Ms. Chew embraced the concept wholeheartedly, and many of her peers and students did as well. And according to the former teacher, the video from CNA only tackled the beginnings of a much deeper problem.

She writes, “Privileged kids look at themselves and believe their successes are due to their own intellect and talent. Underprivileged kids look at themselves and believe that their failures are a result of an innate lack. Then, they look at each other… and form all kinds of misguided impressions. Sometimes, these are dangerous, intolerant impressions that could stay with them forever. I am sad to report that it gets far worse; the CNA video only scratches the surface.”

When she was a student Ms. Chew recalled hearing a conversation about race and eugenics that was loaded with prejudice against people from different races, intelligence and economic status, from the smart girls at her school.

As a teacher she witnessed the Express students in her class mocking the kids who came from poorer backgrounds.

“But who is to blame?

If you tell a bunch of high-achieving privileged kids all their lives that their system is fair and founded on meritocracy, logic leads them to elitism and bigotry.

If you tell a bunch of failing underprivileged kids all their lives that their system is fair and founded on meritocracy, logic leads them to self-loathing and an internalised inferiority.”

The idea that Ms. Chew takes a close look at is privilege. As someone who received the best in life because of her background and race, she and her peers grew up unaware of what privilege is and therefore, some still have the same prejudice and belief in stereotypes they imbibed since childhood.

“We were never taught the concept of privilege. Sure, we knew we were more fortunate than others, but we didn’t really, truly, know. Our elitist attitudes were never addressed, unpacked, torn down… Nobody taught us how the myth of the lazy native was inherited from bitter colonial oppressors, from a time indigenous Malayans rightfully refused to be enslaved. Nobody debunked or addressed hurtful stereotypes that echoed in our school courtyards and corridors. Nobody taught us how our wealth gap is widened by our policies. Nobody taught us about systemic discrimination. Nobody told us that there were kids our age working odd jobs after school to help their parents make ends meet. We thought we were winners, fair and square. Losers were losers because they were lazy and stupid. And even today, as adults, many of my peers continue to believe this.”

The former teacher goes on to illustrate her point with two anecdotes, and ends with saying, “In every ministry-sanctioned Powerpoint Presentation we preach respect and harmony and deplore discrimination, but each time we sing of meritocracy and ignore privilege, we only reinforce a divide.”

She exposes how damaging this is to the youth.

“Children connect these imperfect dots and conclude that their fate is written in their DNA. That these academic streams are their identity. That if they succeed, it is their doing alone. That if they fail, it is all their fault.

And this is the underbelly of our glittering meritocracy. In the shadow of every Starbucks cup and violin lesson is a kid who bought and read all my literature texts even though the subject wouldn’t be offered to her stream in the next year. A kid who writes the most moving poetry in horribly broken grammar. A kid who calls me at 2am, standing on the precipice, ready to jump because he is useless and stupid.

Many netizens agreed with Ms. Chew, and thanked her for putting into words what they had also been thinking.