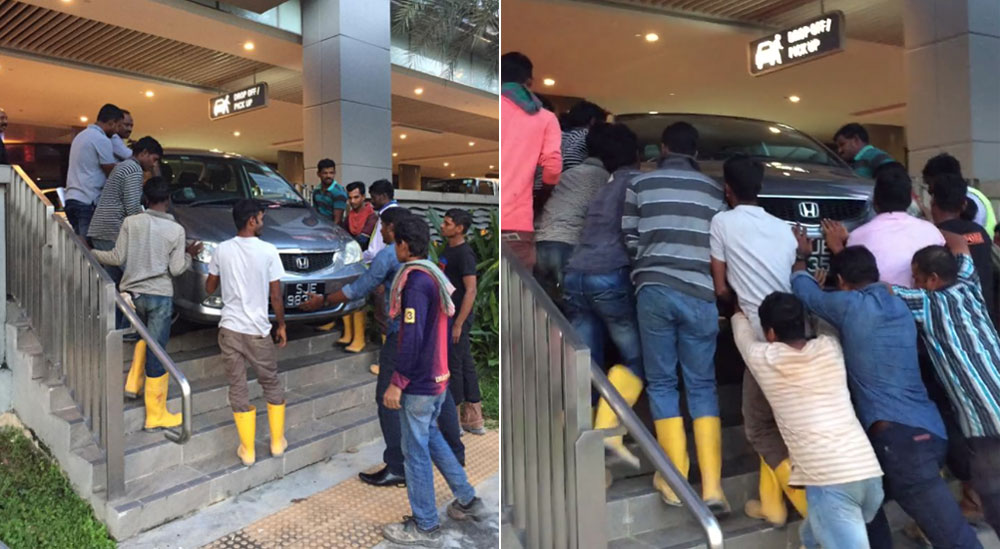 About a dozen or so foreign workers banded together to push a stranded car after the driver had made a wrong turn and driven the car off a flight of stairs at Waterway Point yesterday.

Facebook user Garett Alphonsus Lim who witnessed the foreign workers immediately take action to push the car to safety commended them on the social networking and said that the workers’ efforts were in sharp contrast to locals at the scene who whipped out their mobile phones to photograph the car instead of stepping forward to help:

“New shortcut at Waterway Point…The main thing is not the poor fellow’s car turning into the wrong way but our locals ‘Including Me’, (feeling ashamed) standing down there, whipping out our phones and starting to take pictures while our friends from another foreign country whip out theirs to call for more help to shift the car. That’s what I call ‘Taking Action’!

“Yes…These are the very people who helped construct our skylines but yet are being unappreciated by some in our society:)”

One of the workers who helped spotted Garett’s post and identified himself in a comment. He was swiftly commended for his assistance and kindness by fellow netizens: