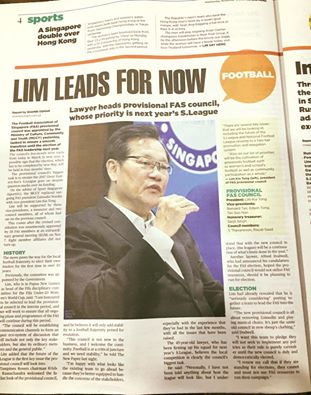 The Ministry of Culture, Community and Youth announced on Tuesday (15 Nov) that it has on the advice of national governing body Sport Singapore, appointed a provisional council to oversee the Football Association of Singapore (FAS) for the next five months. Current FAS vice-president Lim Kia Tong was named interim president and will lead the seven-member council replacing former Member of Parliament Zainudin Nordin.

First point, so FIFA says no more government interference. We have a change of constitution to address this. Yet, almost as if to say, who gives a damn what FIFA says, they have a provisional FAS council appointed by Ministry of Culture, Community and Youth. Yes. It’s the government again. Appointing again. Provisional or otherwise.

Third point, the priority of the New provisional council is the “S LEAGUE”. So once again, priority is clearly spelt out. It remains focused on the elite and then the crumbs from the table to the rest like the grassroots teams and the women teams.

So good luck to those who think this team can lead FAS and Singapore Football out of its dark ages. It’s gonna be same old with some goody thrown your way. If you are happy with some goody bags then this is the team for you.

Fourth point, this provisional council should not to making any policy decisions during this period. Their role is caretaker until election is called and a new elected council comes into office.

Fifth point, the caretaker should not be allowed to run for elected office. Their role is to act now and hand over and they cannot be in provisional council and also be one of the slate. It’s just plainly wrong on so many counts for instance the inability to differentiate between when it’s a meeting or meet the press for electioneering and when it’s for it’s role as provisional council work.

My final point and it’s more of an election rally cry – this just makes me more than ever before to step up and stand for the upcoming elections as we need to make Singapore football better, clean it off politics external and internal, clean the staff team and strength it to bring our best back from afar to lead us into the promise land of football.