Police said no further investigation since no one injured

Singapore—One family is looking for the driver of a speeding black Mazda that struck the wheelchair of a senior citizen, damaging it.

While the driver stopped after the incident to apologise and make sure the family members involved were all right, he did not offer to compensate the family for the damage.

When the family contacted the police, they were told that since no one had been injured in the incident, there would be no further investigation.

They are now seeking the driver of the Mazda.

The broken footrest cannot be repaired, and so the family would like the driver to pay for a new wheelchair, costing less than S$300. 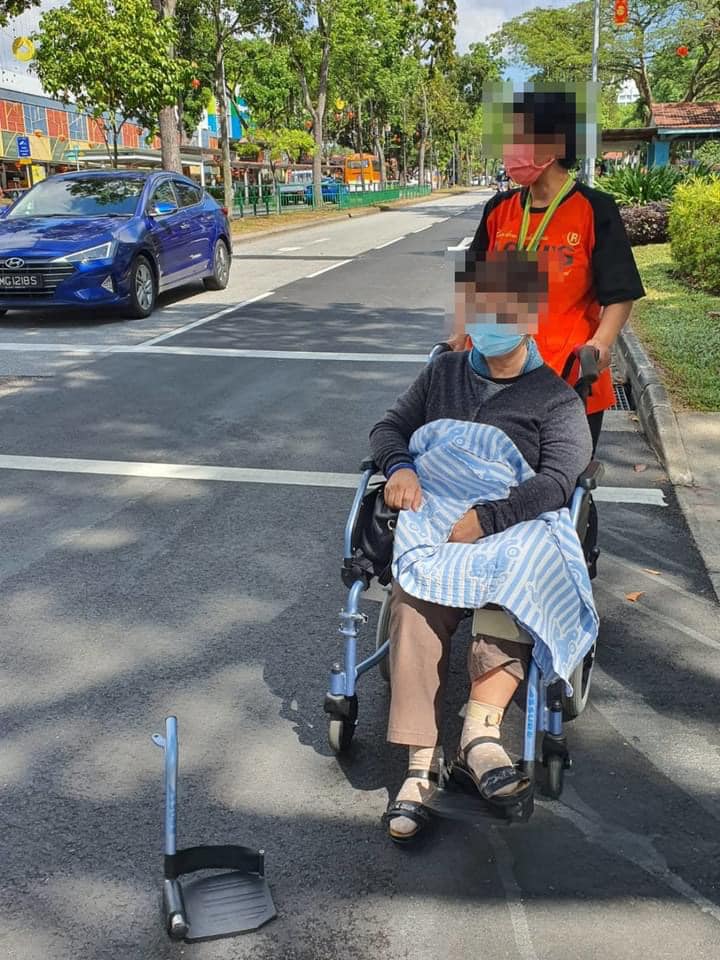 According to the writer of the post on the SG Road Vigilante Facebook page, the incident occurred last Monday (March 8), at around 10.30 in the morning, at Boon Lay Place, towards Boon Lay Shopping Centre.

The poster wrote that the driver of a black Mazda, with licence plate SLS5170S, had “fail(ed) to conform to red light signal & hit pedestrian on wheelchair.” The pedestrian was his mother, who is in her 60s.

His mother, aunt and their domestic helper were about to cross the street when the incident occurred.

They were about to cross when the Mazda drove by, clipping his mother’s wheelchair.

“Said car apparently was cutting lanes and speeding to beat the red lights,” wrote the poster.

He acknowledged that while there were no injuries from the mishap, “My mother, her helper and my aunt were just 1 step away from being knocked down by a speeding car.”

The driver pulled over so he could check on the women, “but only offered apologies.”

A passer-by told the poster’s aunt to take photos and contact the police, which she did, despite being in shock.

The wheelchair sustained some damage.

“The footrest was torn off and unable to be fixed back.”

The traffic police came and told the women to file a report at the police post. After they did that, they were told they would be contacted later.

The following day, the police officer on the case told them to settle the matter in private, as the authorities would do nothing further as no one had been hurt in the incident.

But since the women had been in shock due to the incident, none of them obtained the contact information of the driver of the black Mazda.

Furthermore, the poster wrote, “When we contacted the traffic police again to get help with getting the driver’s contact, we were told the driver has refused to give his contact to us.

“And due to privacy issue, the traffic police cannot release his contact, all they could (do) was to give our contact number to the driver and (ask) us to wait for him to call us.”

The family is yet to receive a call from the driver.

“All we wanted from the driver was a compensation of a new wheelchair that fits our needs, not amounting to SGD$300,” the poster added.

He then asked for the post to be shared, and left his contact number (97731322) for anyone who has pertinent information on the matter.

Read also: Motorcycles lane-splitting along PIE leads to an accident

Motorcycles lane-splitting along PIE leads to an accident