Singapore — Infuencer Xinde Yap, 25, has admitted to having had an affair after someone  threatened to blackmail him about it.

Meanwhile, his wife, Paix Wang, 28, whom he married earlier this year and with whom he has a seven-month-old daughter, has said that she is standing by her husband.

Yap, who is also known as one of the Dee Kosh Boys for appearing in the YouTuber’s videos, posted an IG story on Sunday (Dec 13), in which he said someone had found out about his affair and was threatening to blackmail him.

And rather than succumbing to the blackmailer, he was choosing instead to face the consequences of his behaviour.

He said he was posting “to own up to mistakes I have made as a husband and a father”.

Yap added: “While we wanted to settle this personal matter privately and as a family. I am cornered to speak about this publicly because there is someone who knows about this and is using my status as a public figure to try to extort from us $20k so that this wouldn’t be exposed online.” 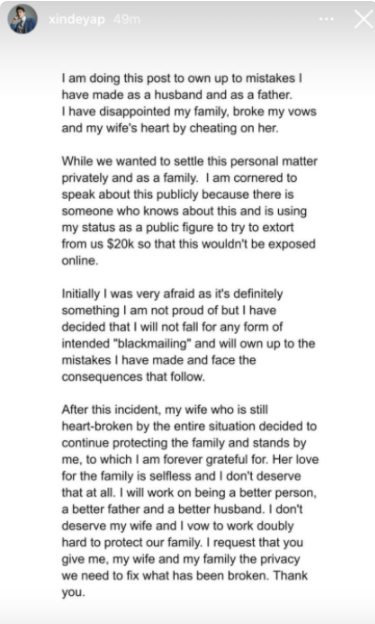 He added that he was grateful that his wife was standing by him, adding that he would work on being a better person, husband and father.

Wang, who goes by @25___mn on Instagram, was open about how hurt she felt by her husband’s unfaithfulness. 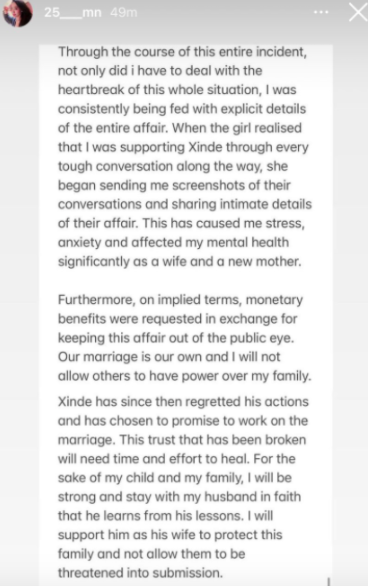 She criticised the other woman’s behaviour and said that she stood firm in her choice to stay with her husband. “For the sake of my child and my family, I will be strong and stay with my husband in faith that he learns from his lessons. I will support him as his wife to protect this family and not allow them to be threatened into submission.”

Wang added that “monetary benefits were requested in exchange for keeping this affair out of the public eye”.

Yap, whose over 70,000 followers make him one of the biggest IG celebrities in Singapore, opened a bar in 2017 in Tanjong Pagar called Chug Chug, which became very popular.

And in a November 2019 Dee Kosh YouTube video called Guess Who’s Getting Married?, Yap announced that he was getting married to Wang. The video featured his proposal to Wang, who was already pregnant at the time. /TISG

Read also: Xiaxue joins Ryan Tan to defend Dee Kosh after he is thrust under the spotlight again