Singapore — YouTuber Dee Kosh, who was alleged some months ago to have solicited sexual favours from minors, was thrust under the spotlight again at the weekend when photos surfaced online of him serving a Corrective Work Order (CWO).

However, in a display of camaraderie on Instagram on Monday (Dec 14), fellow YouTuber Ryan Tan, who also served a CWO at the same time, has spoken out in support of Dee Kosh, whose name is Darryl Koshy. Also voicing her support on the same platform is popular blogger Xiaxue.

“Yes this is indeed us doing our Corrective Work Order because we were caught littering,” Tan wrote in an Instagram Story about the photos.

They were caught for littering in December 2019.

In an outburst that seemed to be triggered by having to serve the CWO together, Tan added that he has an “unbreakable bond” with Dee Kosh. 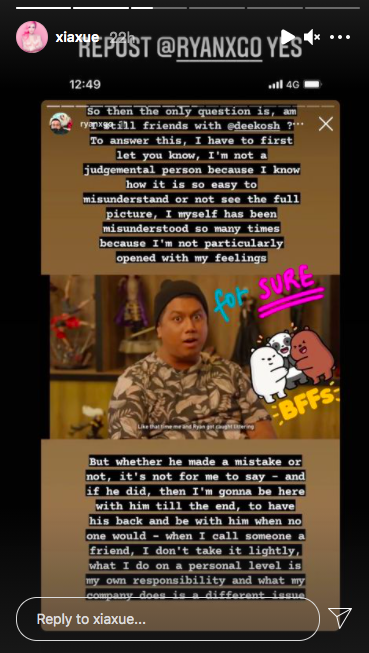 “But whether he made a mistake or not, it’s not for me to say – and if he did, then I’m [going to] be here with him till the end, to have his back and be with him when no one would,” he said.

Dee Kosh has been accused by at least five people of soliciting sexual favors from minors. He has kept silent and not posted or appeared in videos since then. The authorities have issued no public updates on the case. 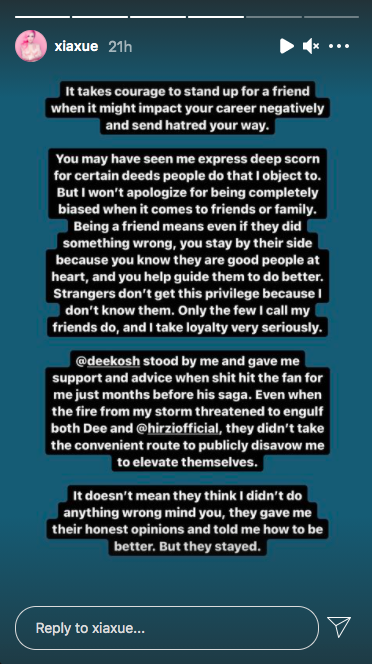 In Instagram Stories of her own, Xiaxue, who is also a YouTuber, added that she had waited until now to say her piece, and only did so at this point because Tan said his part about Dee Kosh as well.

In her Instagram stories, she wrote that she supported Dee Kosh as well, and explained : Dee Kosh “stood by me and gave me support and advice when s**t hit the fan for me just months before his saga”. She added that he “didn’t take the convenient route to publicly disavow me”.

She said: “I will never forget that kindness. What kind of person would I be if I were to abandon Dee in his time of need when he was there for mine?”

“To not lend a helping hand to a friend in need is one thing. But to kick them when they are down? Despicable. The idea that people celebrate this type of behaviour is disgusting.”  /TISGFollow us on Social Media