WP member Yee Jenn Jong said that it is “ridiculous and a mockery of our democracy for un-elected and losing candidates of GE to be approving community projects..." Ex-ruling party MP Lam Pin Min has drawn intense criticism for officiating a community project in Sengkang GRC in place of the elected MPs from the Workers’ Party (WP) who won the ward in the July election.

Dr Lam, who was first elected to Parliament as part of PM Lee’s team for Ang Mo Kio GRC in 2006, was part of the PAP’s team for the newly created Sengkang GRC in the 2020 general election. His running mates included Minister in the Prime Minister’s Office Ng Chee Meng and grassroots MP Amrin Amin.

The strong People’s Action Party (PAP) team faced off against a WP team, that was mostly made up of political novices. In a stunning upset, the WP team edged out the ruling party team and won Sengkang GRC. The WP’s victory at Sengkang GRC was historic since it is only the second multi-member ward that has ever been won by the opposition.

Dr Lam, Mr Ng and Mr Amrin were all unseated from police office and denied the chance to return to Parliament. Mr Ng was allowed to continue as the chief of the labour movement despite being ousted from Parliament while Mr Amrin joined two tech firms after the election. Dr Lam became the chief executive of the Eagle Eye Centre.

Although all three former political office-holders were not elected at Sengkang, they remain the PAP’s branch chairmen in the ward. They are also active in the grassroots organisations at Sengkang, which are under the People’s Association – a government statutory board.

“This project has been initiated by the RC many months ago after receiving many requests from residents for a place to showcase their green fingers. Glad that it is finally ready and hope that residents will enjoy the communal gardening experience!”

While some netizens welcomed the ex-MP back to Sengkang, several others criticised Dr Lam for participating in the opening in place of the elected MPs. Some Facebook users asked why the elected MPs are not accorded the respect they are due while others called Dr Lam a “free rider” – a term PM Lee recently used to describe certain opposition voters. 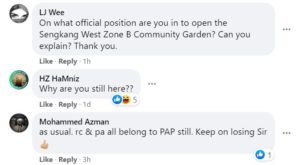 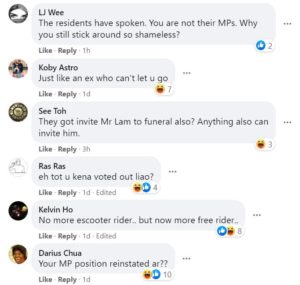 This issue of defeated ruling party candidates continuing to receive certain privileges in opposition-held wards is not new. The WP has been speaking out against the Government’s practice of installing defeated PAP candidates as grassroots advisers in wards they hold, for several years now.

Curiously, none of the opposition parties that have been defeated in other wards have had the opportunity to place their representatives and branch chairmen to run grassroots activities in the wards they hope to contest, in between election terms.

Last year, WP secretary-general Pritam Singh decried this practice and pointed out how it gives the defeated candidates the power to approve or reject community projects and the discretion on how to disburse taxpayer funds for upgrading projects proposed by the elected MPs.

Highlighting that this practice makes the political playing field uneven, Mr Pritam noted that defeated ruling party candidates are made “relevant for residents” and allows them to “campaign for votes well before the General Elections.”

Mr Pritam said that the WP has to go through these defeated PAP candidates to raise projects and gain approval on spending taxpayer dollars that are made available to town councils for community upgrading projects.

Asserting that these grassroots advisers are able to delay community improvement projects in opposition wards for years or ignore proposals altogether, the WP chief said that he has proof that grassroots groups have ignored his proposals for community upgrading despite the fact that he has sent multiple chasers and repeat reminders.

WP member Yee Jenn Jong echoed his party leader’s views and said that it is “ridiculous and a mockery of our democracy for un-elected and losing candidates of GE to be approving community projects (funded by taxpayers) initiated by elected members of parliament, and delaying or ignoring chasers because it is simply playing dirty and inconveniencing residents who may badly need these facilities.”

Noting that the PAP’s past promises of community upgrading in exchange for votes irked him well before he joined politics, Mr Yee said that such practices are akin to “holding residents hostage with their own taxpayers’ money to force them to vote for the ruling party.”

More recently, in July this year, former Hougang SMC MP Png Eng Huat highlighted how he had to “contend with the presence of the losing PAP candidate everywhere in the estate” despite having been elected at the ward for two terms.

Mr Png wrote on Facebook: “The PAP had come up with the Grassroots Advisor scheme to perverse the one-man-one-vote system so that its losing candidate will remain relevant and visible, despite not having the mandate to run the constituency.

“The PAP is basically slapping the voters in face and telling them, “It’s my choice for MP or none!”

Both Mr Png and his successor, Dennis Tan who was elected at Hougang in the July election, have highlighted instances in the past where the defeated PAP candidate in their ward has tried to claim credit for upgrading programmes for Hougang residents.

I was sworn in as MP of Hougang on this day, 8 July, 8 years ago. I always had to contend with the presence of the…