The Independent News
Home News SG Politics Ex-MP disgusted that newspaper failed to highlight that one arrested in FAS-scandal... 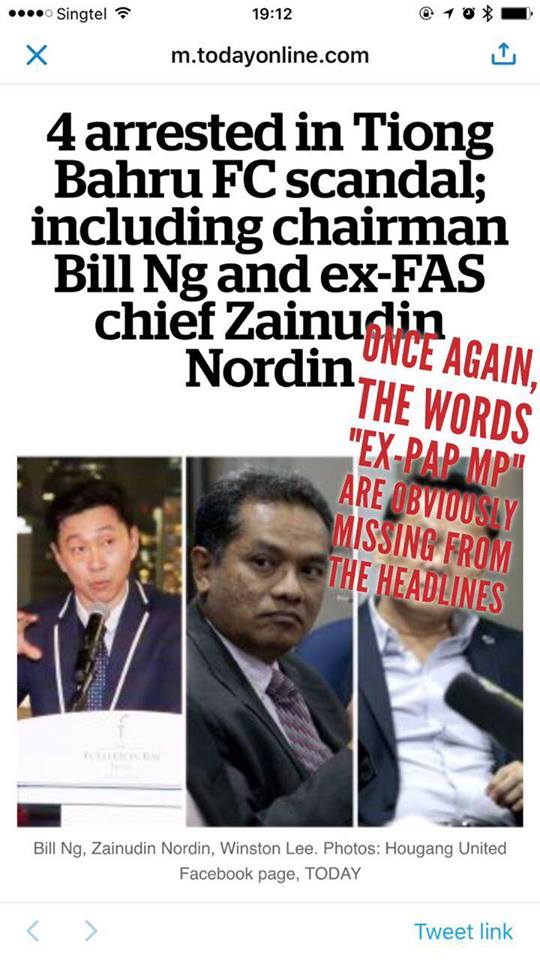 The Today newspaper reported that former PAP MP president Zainudin Nordin was arrested along with Hougang United chairman Bill Ng and his wife Bonnie Wong, and Football Association of Singapore (FAS) general secretary Winston Lee. Mr Zainudin (who is also the former FAS chief) and the others are currently out on police bail. The four of them are assisting the Commercial Affairs Department (CAD) in a case of improprieties at FAS’ local soccer clubs.

Despite being arrested, the four have not been charged by the police for any crimes yet. Today reported that those that wanted police bail first have to get arrested before one is offered to them. The CAD investigations centers on Mr Ng’s $500,000 donations to FAS.

Former Member of Parliament (MP) for Punggol East, Lee Lilian, has expressed disgust that the newspaper report did not mention that one of the person who was arrested is an ex-People’s Action Party (PAP) MP. Ms Lee is a member of the Workers’ Party.

“Really, nothing against the people involved.

I’m just Super disgusted with the double standards from our msm. If this is an ex WP MP or maybe even ex-member of the WP, I’m pretty sure the headlines will read ‘Ex-WP MP arrested…’

Zainudin was elected from Bishan-Toa Payoh GRC in 2001 before being appointed to the FAS as its chairman. He is also the former Mayor of the Central Community Development Council. Zainudin stepped down from political office before the 2015 General Election.Follow us on Social Media