Home News Featured News DPM Teo: MPs and public officers who 'get back' at each other...

DPM Teo: MPs and public officers who ‘get back’ at each other will be investigated 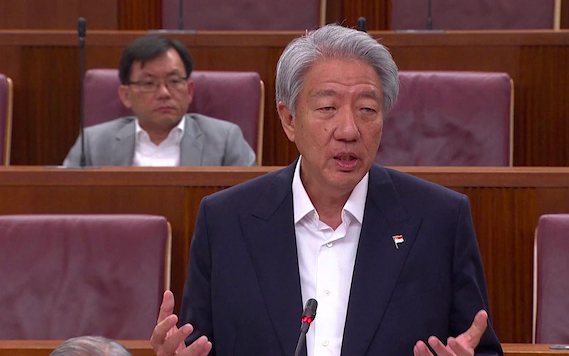 Deputy Prime Minister (DPM) Teo Chee Hean asserted yesterday that Members of Parliament (MPs) and public officers who misuse their influence to ‘get back’ at one another due to work disagreements will be investigated.

The DPM was responding to a recent interview with parliamentarian Lee Bah Wah, in which she revealed that certain public officials have been put off by her straight-talking manner which has earned her a reputation for being abrasive. She had added that her friends had cautioned her that these civil servants would retaliate against her, once when her term ends.

DPM Teo asserted that while MPs and public officers “will not always see issues from the same perspective” due to competing demands and priorities, they should resolve such issues through “reasoned discussion and objective analysis”:

“When this happens, they should resolve whatever issues that may arise professionally, through reasoned discussion and objective analysis. The Government expects public officers and MPs alike to conduct themselves in a proper manner. One can disagree while respecting the integrity and point of view of the other party.”

The seasoned politician who also heads the civil service added that retaliation over work disputes is “improper” and he will see to it that such action will be investigated, if reported:

“It would be improper for either MPs or public officers to ‘get back at’ each other because of disagreements over work. If anyone knows of either public officers or MPs using their position or authority to act in this improper way, he or she should raise the matter with me with the facts, and I will have it investigated.”

The DPM further said that the “vast majority of public officers” are as passionate as Dr Lee about serving the people, and added:

“To put things in perspective, overall we have an excellent public service, and a well-functioning Parliament. We should keep it that way, and work to improve on what we have.”

Singapore — The last two weeks of December saw at least 469 OCBC customers fall victim to phishing scams, with a total of S$8.5 million lost from their bank accounts. Ho Ching, a Director of Temasek Trust, shared the...
Read more

Singapore — The fight for road space between motorists and cyclists can be a very real thing in Singapore, with some have even getting...
Read more

Singapore — People in different parts of the world, including Singapore, are finding themselves getting re-infected with the coronavirus responsible for the current pandemic.  There...
Read more

‘Look! Such an inconsiderate act!’ — Woman shakes rug over balcony in Yishun

Singapore — A woman was caught on camera shaking her rug over a balcony to clean it, sparking criticisms among netizens over the 'selfish'...
Read more

Singapore — The fight for road space between motorists and cyclists can be a very real thing in Singapore,...
Read more

Singapore — People in different parts of the world, including Singapore, are finding themselves getting re-infected with the coronavirus...
Read more
Follow us on Social Media