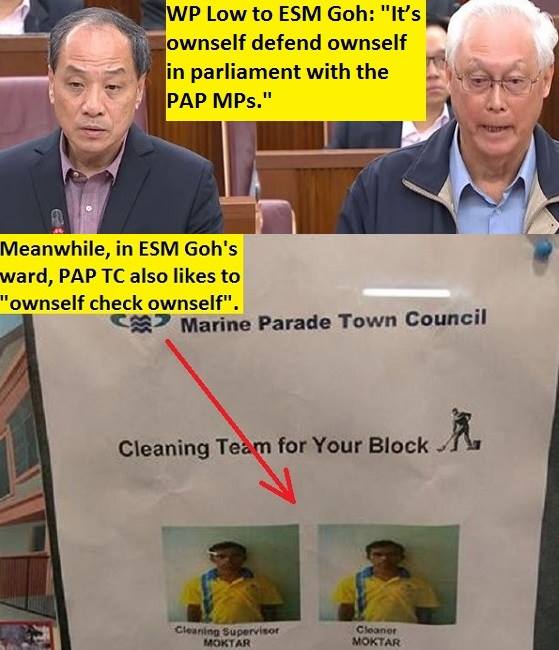 In the lead up to the 2015 General Election, Emeritus Senior Minister Goh Chok Tong lambasted the opposition’s call to elect more opposition members into parliament to robustly check on the People’s Action Party (PAP), as a “seductive lie”. Mr Goh, who until the last election was the anchor-Minister for the Marine Parade Group Representation Constituency, proudly declared: “We (the PAP) are our own checks.”

Pritam Singh, an opposition MP, brought up this declaration of Mr Goh’s and famously dubbed it in Singlish, “ownself check ownself”. Mr Singh asked Singaporeans if this is a system we want in Singapore.

The anchor-member of Mr Singh’s Aljunied GRC, Mr Low Thia Khiang, also made a similar comment more recently in Parliament when he rose to speak on the allegations against Prime Minister Lee Hsien Loong made by his siblings about the abuse of power.

When Mr Goh asked him and other MPs to “state their position clearly on PM’s and the Government’s integrity,” Mr Low pointed out that they cannot do that because all the PAP has done is “ownself defend ownself”.

Now a viral Facebook post from a resident of Marine Parade GRC seem to suggest that Mr Goh’s constituency is really serious about “ownself check ownself”.

The Facebook post of the post has gone viral with over 1,700 shares since being posted on Saturday. Several other netizens have taken a dig at the town council over the supposed gaffe.

Posted by We want Minister Grace Fu to resign on Monday, 10 July 2017