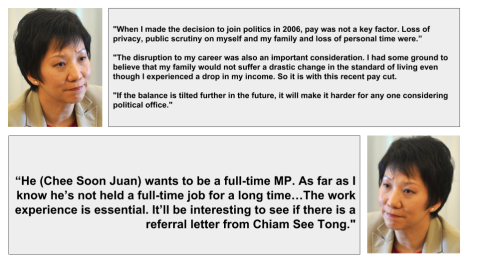 By: Andrew Loh
So, as I had expected, it didn’t take long for the PAP to resort to below-the-belt attacks on Dr Chee Soon Juan – again.
Just a day after Nomination Day, at her party’s first rally for the Bukit Batok by-election, the Minister of Culture, Community and Youth (MCCY), Grace Fu, apparently launched an ad hominem volley at the SDP secretary general.
“He wants to be a full-time MP,” Ms Fu said, referring to Dr Chee. “As far as I know he’s not held a full-time job for a long time… The work experience is essential. It’ll be interesting to see if there is a referral letter from Chiam See Tong.”
First, it is a rather uncultured remark from a minister of culture. Yes, ironic.
Second, Ms Fu’s remarks would actually bring the same question to her colleagues, many of whom are helicoptered into ministries and GLCs and associations without any thread of relevant experience.
Lee Bee Wah in the table tennis association, for example.
Tin Pei Ling as some adviser in a football club.
And what about the many ministers over the years – perhaps including Grace Fu herself – who were sheltered into the ministries without any relevant experience.
Vivian Balakrishnan, an eye doctor, for example.
Or more recently, military general Ng Chee Meng as Education Minister.
But the more important thing about Ms Fu’s attack is this: Dr Chee has not been sitting idle at home all these years. Commonsense would tell you that if he did, his family would not have survived till today – given, as a fact, that Ms Fu’s party has been running him down for more than 20 years.
24 to be exact.
Dr Chee has nothing to be ashamed about.
He has been bankrupted, and jailed and fined, and has had his name dragged through the mud, with all sorts of labels pinned on him – from the mouth of the late Lee Kuan Yew to the pages of the govt-controlled mouthpieces.
Yet, he has survived, taken all this in his stride – and has not returned kind for kind.
Dr Chee, in fact, even in his rally yesterday (29 April 2016), called on his supporters to not attack the PAP’s David Ong, whose personal indiscretions have led to the by-election.
Dr Chee has nothing to be ashamed of.
Even as a student, Chee knew what it was like to struggle, as recalled by his friend and party colleague, Jaslyn Go, in the book “A Caring Family Man, An Inspiring Friend”.
“With what little money he had, he went to the United States to study for his degree,” she said. “The money he had at that time was only enough to last him for only one trimester (sic), not even one year…While most of his peers were busy partying, he was stuck, taking on odd jobs to pay for his tution fees and living expenses.”
Another of his friend, Dr Wong Wee Nam, knows his family well.
“His (Chee’s) children do not carry a handphone or play with iPads or any computer gadgets. Instead they indulge in simple pleasures like reading books borrowed from the public library.”
So, how has Dr Chee survived, financially?
He worked.
Yes, he did. Like everyone else.
And he worked hard.
His work is to write books and academic papers – as many thousands others do. And he has had to sell his books,  oftentimes literally on the streets, as the bookstores here were frightened to sell them.
And he also does political work for his party, and indeed for Singapore, even helping to distribute supplies to the needy.
There is no shame in such work.
Grace Fu needs to understand that there are many different ways for a person to work. But this might be hard for someone who lamented at the cut in ministers’ salaries in 2012, even after the drubbing her party received from the electorate in the general election just months earlier.
It is worth repeating what she said then, as it shows the small mind that inhabits her head:

“When I made the decision to join politics in 2006, pay was not a key factor. Loss of privacy, public scrutiny on myself and my family and loss of personal time were.

“The disruption to my career was also an important consideration. I had some ground to believe that my family would not suffer a drastic change in the standard of living even though I experienced a drop in my income. So it is with this recent pay cut.

“If the balance is tilted further in the future, it will make it harder for any one considering political office.”

Appalling, even now.
Of course, Ms Fu later “clarified” and claimed that the public had “misunderstood” her remarks. This led to one blogger-lawyer saying Ms Fu should resign instead. (See here.)
It is unfortunate, to say the least, that DPM Tharman Shanmugaratnam’s Nomination Day pledge for a clean fight in the by-election is now left asunder by his minister-colleague ad hominem attack on Dr Chee.
One can only hope that the DPM will have a quiet word with Ms Grace Fu – and tell her that her remarks, and her mindset, are unacceptably disgraceful, and lowers the office of a minister to the cesspool of dirty politics.
In the 2015 general elections, Chee gave a speech.
There was one part in which he spoke of an instance where he and his wife considered buying a box of Haagen Dazs or Ben & Jerry’s ice cream for his kids.
In the end, they chose Wall’s after looking at the prices.

But even then, his wife said they should buy it only if it was on offer.
This is what ordinary folks like us face.
Sometimes we have to make such decisions when we go grocery shopping, for example. We would only buy “luxury” items if they are on offer because it makes sense as many things in Singapore are overpriced.
But I don’t think someone like Grace Fu can really understand how we ordinary folks live.
For if she does, she would realise that the many people out there who have lost their jobs and who may be out of work for a long time would be facing quite trying times.
It is nothing to make fun of.
But if you want to know about Dr Chee – who lives in a 3-room HDB flat with his family – have a look at this video, and see if you would agree with the careless and insensitive remarks of Minister Grace Fu.
[fvplayer src=”http://youtube.com/watch?v=6J0b4nDrQL0″]
—
Published with permission from Andrew Loh’s website.