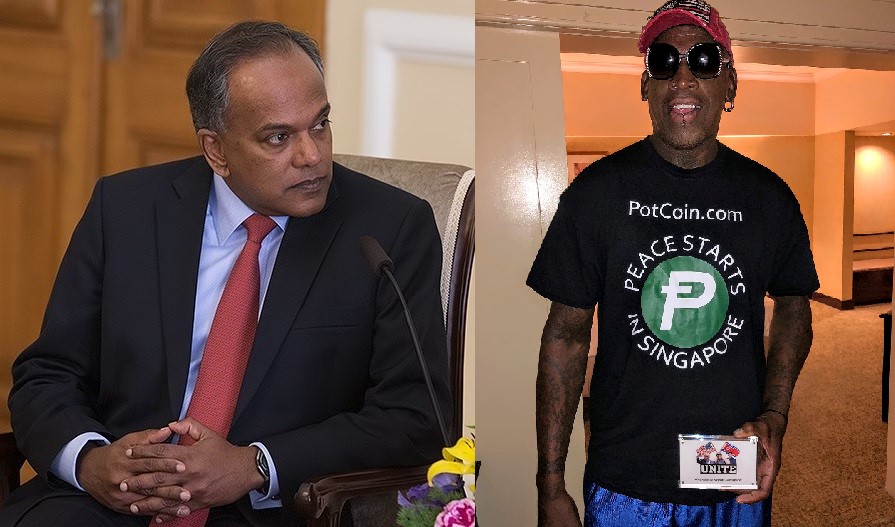 The former NBA player and Hall-of-Famer who is known for his unique friendships with both Trump and Kim, made waves during his trip here. Besides revealing that former US President Obama brushed him off when he tried to convey Kim’s message seeking a deal, Rodman broke down during a CNN interview recounting the backlash he received when he expressed hope that the US would meet North Korea.

Rodman also expressed that he deserved the Nobel Peace Prize for his role in the summit occurring, as he ate Chicken Rice at Maxwell Food Centre.

Interestingly, Rodman has also prompted speculation over whether the authorities might have turned a blind eye for promoting a cryptocurrency platform dedicated to the purchase of legal marijuana throughout his trip here.

The cryptocurrency platform, PotCoin, was the group that sponsored Rodman’s trip to Singapore. PotCoin also played a part in sponsoring previous activities Rodman has been involved in when he visited North Korea in the past.

While Rodman does not appear to have flouted any laws here, his open promotion of PotCoin has raised eyebrows – especially given how the authorities routinely reiterate the need to have strict laws prohibiting drugs.

Just three months ago, in March, Law and Home Affairs Minister K Shanmugam expounded on the need to toughen Singapore’s laws on drugs, in Parliament.

Asserting that Singapore must ‘be firm resisting those who try to force their ideologies’, the Minister called out activists who campaign against the mandatory death penalty for drug-related offences and said:

“The activists light candles for traffickers outside Changi Prison, they write emotive stories… But who cares for…real victims? How many young lives have we saved with our policies? Would you hear a squeak from the activists, about these people?”

https://theindependent.sg.sg/dennis-rodman-confirms-he-will-be-in-singapore-for-trump-kim-summit-even-though-he-was-not-invited/Follow us on Social Media