The Independent News
Home News SG Politics Did Singapore Ambassador to US only tell half the story in his...

Did Singapore Ambassador to US only tell half the story in his official reply to New York Times? 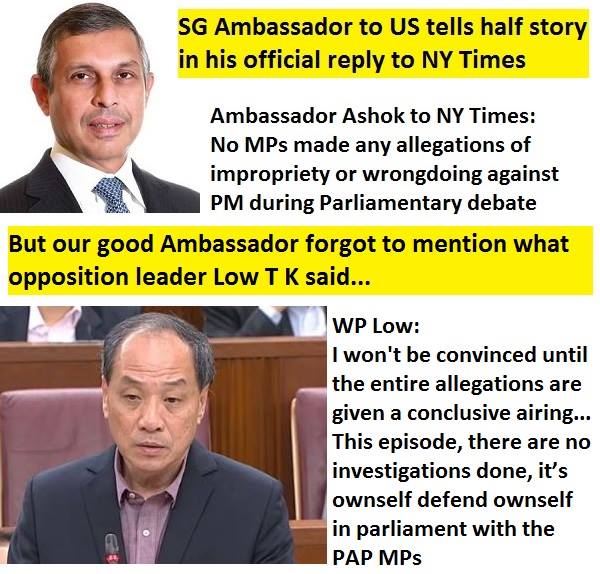 It was reported in Straits Times on 11 July that the Singapore Ambassador to US had find fault with an article published by New York Times (NYT), “Family dispute over house of Singapore’s founder erupts as national crisis“.

In his reply to NYT, the Singapore Ambassador noted that “no Member of Parliament made any allegations of impropriety or wrongdoing against the prime minister during the debate”.

“Nor has anyone else produced specific evidence to back the siblings’ vague allegations,” he added. “There is no national crisis in Singapore.”

So, in his reply, our good Ambassador gave the readers of NYT an impression that all MPs in Parliament were supportive of PM Lee over the Oxley House episode.

Leader of opposition not convinced

However, the Ambassador did not tell the whole story of what had happened in Parliament during the debate on 4 July. He neglected to tell New York Times that the leader of opposition, Low Thia Khiang, had informed Parliament that he would not be convinced until the entire allegations are given a conclusive airing.

“Madam Speaker, the Workers’ Party has not gone through the due process to decide whether or not, to conclude whether the allegations made by the Lee siblings (against PM) are baseless,” Low said.

“For me personally, I will not be convinced until the entire allegations are given a conclusive airing. We should know what else do they (the siblings) have.”

“This episode, there are no investigations done, it’s ownself defend ownself in parliament with the PAP MPs,” he further added. “I mean I wonder how you would want to convince me and my party and Singaporeans that it is conclusive, and it is something that we can all be convinced entirely.”

Low also raised the question why PM Lee didn’t sue his siblings over the accusations leveled by them against the PM.

“I hope he would clarify the doubts I have this question, this nagging question that why he didn’t sue (his siblings),” Low said. “First, does he not agree that his family is not any ordinary Singapore family. And the person at the centre of the issue is the Prime Minister of Singapore, not any other person.”
All these were conveniently sidestepped by our good Ambassador in his reply to NYT.