Did “Government friendly” Straits Times publish yet another misleading statement after preaching about fake news? 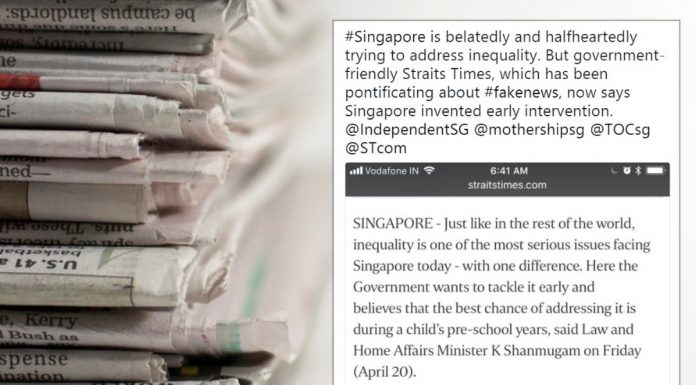 Did The Straits Times claim that Singapore invented early intervention after pontificating at length about fake news? This is what noted academic Cherian George has pointed out after the “government-friendly” publication published the following statement in an article today on the government’s plans to tackle inequality from the preschool stage:

ST essentially appears to be claiming that Singapore is the one country in the rest of world that believes that early intervention in the pre-school years can alleviate inequality. This sophistic statement stands in ironic contrast to the publication’s usual preaching about the dangers of fake news.

Taking to Twitter, George noted: #Singapore is belatedly and halfheartedly trying to address inequality. But government-friendly Straits Times, which has been pontificating about #fakenews, now says Singapore invented early intervention.

Early intervention for disadvantaged children has been discussed in countries like the United States of America since the 90s and programmes offering support for underprivileged children from the early childhood ages are neither new nor exclusive to Singapore.

According to researchers and studies from the 90s, early childhood intervention programmes originated as a natural progression from special education for children with disabilities. Support services for disadvantaged children were pioneered in research units at universities like the Syracuse University in the United States and Macquarie University in Australia, while others were initiated by private organisations.

Interestingly, ST appears to have changed the wording of its statement in the latest copy of the article which is available online. It has changed the original statement flagged by George to: “Just as it casts its shadow over the rest of the world, inequality also remains one of the most serious issues now facing Singapore – with one difference. Here the Government wants to tackle it early and believes that the best chance of addressing it is during a child’s pre-school years, said Law and Home Affairs Minister K. Shanmugam yesterday.”

It is unclear why the publication edited the wording of the statement since the implication that Singapore is the one country that wants to tackle inequality in the early childhood years appears to remain.

This is not the first time ST has come under fire for allegedly publishing errors or misleading statements in their articles. Just last month, netizens called the broadsheet out for errors in three separate articles within one week:

https://theindependent.sg.sg/netizens-call-the-straits-times-out-for-errors-in-three-separate-articles-within-one-week/Follow us on Social Media