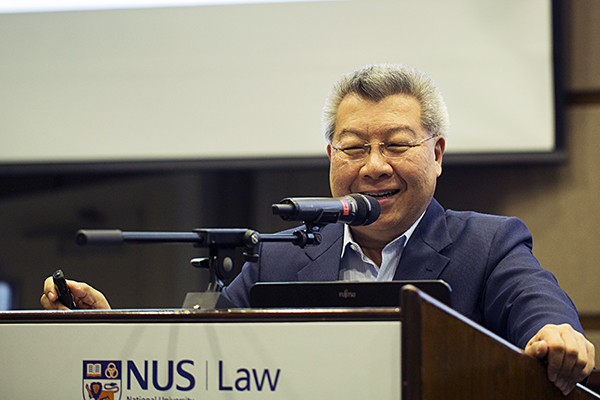 Appearing before the Constitutional Commission to review certain aspects of the Elected Presidency, Constitutional law professor Dr Kevin Tan said that Singapore should revert to the old system of Parliament appointing presidents. That he said, will ensure that the Republic has a minority president from time to time and select appropriate candidates for the office.
Dr Tan said that that it was “no accident” that Singapore had, as its first president Mr Yusof Ishak, who is Malay; followed by a Eurasian president, Dr Benjamin Sheares; Indian president, Mr C.V. Devan Nair; and “only after that” a Chinese president, Dr Wee Kim Wee.
To questions from the Commission as to if a nominated president would have the authority to check and say no to an elected Parliament, and if an appointed president would affectively check a parliament which appointed him (her), Dr Tan said that what was more important is if the person is independent.
“Just because someone is nominated and not elected does not deprive him of his independence,” he replied.
If the Republic wants to retain the Elected Presidency scheme, then it must ensure that the Elected President has an absolute majority before he is elected, Dr Tan suggested.
Dr Tan commented further about the Elected Presidency in his Facebook and said:
“Yesterday, I attended the final session of the Constitutional Commission public hearings as representor. I was away during the time the first few hearings were held so it was quite an interesting experience. The Commission members had obviously read all the submissions carefully and probed me thoroughly on the points made and beyond.
Personally, I was rather flummoxed by Prof Chan Heng Chee’s assertion that “a win is a win” and that majorities did not really matter. I argued that while there were certainly systems in the world where the single plurality (first-past-the-post) system allowed the person with the highest number of votes to win an election, this was a less than optimal system and that given the opportunity to create or augment our system, we should go for a second-round run-off election of the top two candidates if no one had an absolutely majority.
Consider this. In the 2002 French Presidential Election, there were 16 candidates and the top candidate, Jacques Chirac only got 19.88% of the vote. His next closest rival, Jean-Marie LePen got 16.86%. How much of a mandate would Chirac have if the French had been content – like the English – to accept the first-past-the-post sytem?
Round 2 saw Chirac securing 82.2% against LePen’s 17.8%. A much better mandate, in my view. All those who had not voted Chirac in Round 1 now switched to their next favoured candidate, when confronted with only 2 choices. LePen only got an additional 1% of the votes, showing how much the electorate DID NOT want him as President.”Follow us on Social Media