CONFESSIONS OF A GRANDFATHER: Breaking the Arrian Code 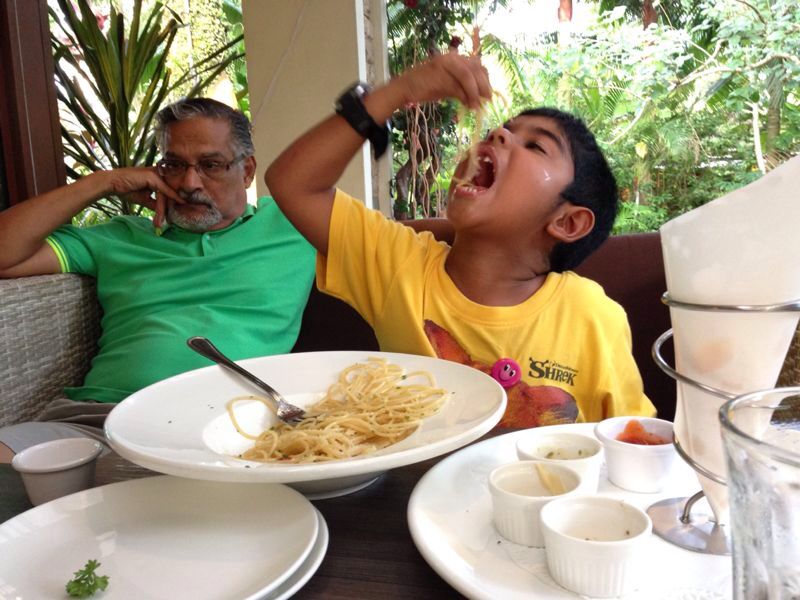 By: P N Balji
Finally, I have broken the Arrian code. Seven years of dealing with a boisterous, fearless, restless and rebellious boy, this grandfather is slowly beginning to find the pieces of the magic formula on how to deal with him.
There were moments when I nearly gave up. Thank goodness I didn’t. Now I see only a doting older brother, a caring son and a loving grandson. The other traits…well, they don’t matter.
I used to see only the outside of Arrian. He is impatient with his answers – that is, if he does answer your questions at all – and occasionally uses words that I don’t want to repeat here. Getting him to focus on something is near impossible. And trying to start a conversation with him can make my blood pressure go up.
Me: How was school?
Arrian: Good.
Me: How was your Malay spelling test?
Arrian: Fail.
When I look at his exercise book, it shows a perfect score. Those were frustrating times.
For my own peace of mind and fearing that the tension in the relationship will sour, I decided
to change tact. I decided to focus only on his positive factors. His mind works in strange ways. I have watched him build, bit by bit, his model airport at home with patience and diligence.
I have seen the airport grow from just a handful of planes to include the control tower, aerobridges, a hangar, ambulances, police cars and the various terminal buildings. I make it a point to talk to him about his airport.
I take him to Changi and Seletar airports, give him clippings of newspaper stories of planes and narrate my own experiences in airports I have visited. He is obsessed with the MH370 flight that disappeared on its way from KL to Beijing two years ago and I tap into that to talk about other air mishaps.
And last Sunday, I took Arrian to the air show. I asked him if he knew how to get to the venue by train.
“Take the train to Bishan, change at Paya Lebar, change again at Tanah Merah to reach the Expo station.”
He goes to great lengths to spend time on projects he initiates. Classroom settings put him off. I remember taking him to an aerospace adventure club during the year-end holidays. As we we were entering the club at Seletar, he asked me: “Is it going to be like in a class room?” It was clear that he didn’t want to go back to a school setting during his holidays.
Some of his questions have baffled me. When told that the collective noun for fishes is school, he shot back: “How come they are not wearing uniforms?” Immediately came his own answer: “Because the uniforms will get wet.”
The way he takes over the responsibility of talking to his younger brother is heart-warming. Once, their father was trying to talk to his three-year-old at night because Roman had smuggled some sweets in his pocket and wanted to eat them.
This is what his father said in a family whats app group chat: “Roman had wanted to eat sweets before his bedtime. I told him to hand them over. “Arrian swiftly intervened, knelt down to his brother’s eye level and explained to him that eating sweets now will give him
indigestion (his word).”
When his father told him to give a speech on my birthday in December, he  sprung up immediately and gave a short speech that surprised all present. He ended by looking at me and saying: “Thank you for teaching me Malay.”
The story behind these stories is that bringing up children is a full-time job that needs skill, creativity, passion, strategies, tactics, love, patience…
You do it because you want to, not because you have to. Maids, teachers, relatives are just an adjunct. They help you to take care of the extras. You provide the core.
My attitude towards Arrian changed after I saw how he took an instant liking to his boxing coach. I told coach Bala some of the characteristics of the boy. Coach Bala’s strategy was an eye-opener. He introduced Arrian to the rest of his students with these words: “This is Arrian. Look at him, his body, the way he walks and talks. He will make a great boxer. He is my little hero.”
Arrian melted in front of him.
Thank you, coach. You have helped a grandfather understand his grandson better.Follow us on Social Media