Mr Chan added that the foreigners are not competing with locals, but are "competing for Singapore."

Minister for Trade and Industry Chan Chun Sing has said that the new Government scheme that will allow local technology firms to hire foreign talent more easily can be extended to other industries in Singapore. He added that these foreigners are not competing with locals, but are “competing for Singapore.”

The Minister made this statement on Thursday (1 Aug), despite the backlash against the new scheme that has erupted on social media.

The day before Mr Chan made this announcement, the Economic Development Board (EDB) and Enterprise Singapore announced that it is piloting a new scheme to facilitate the hiring of foreign talent in local technology firms and provide more flexibility for employment pass (EP) applications for foreign talent.

The Government agencies, which are both statutory boards under the Ministry for Trade and Industry, said that the scheme would make it easier for companies to get the talent they need.

According to the Ministry of Manpower, foreign professionals with acceptable qualifications who have a job offer in Singapore for a managerial, executive or specialised position with a salary of at least S$3,600 can apply for an EP. This usually means that the foreigner must have a good university degree, professional qualifications or specialist skills.

Under the new scheme, however, more flexibility will be given to EP applicants. An EDB spokesman indicated that the scheme could allow the hiring of foreigners who have “deep skills in place of formal academic qualifications” and could allow companies to pay staff with stock options instead of at least $3,600 monthly salary.

The scheme drew backlash from Singaporeans, who asked whether locals are not talented enough for these posts and whether the education system has failed to produce the “top talent” tech firms would need to bring from foreign nations: 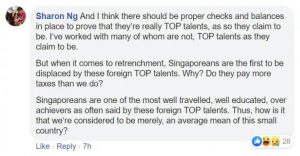 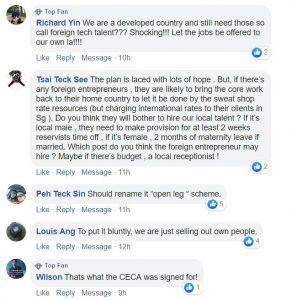 A day later, Mr Chan told Bloomberg that the new scheme could be extended to industries beyond the technology field. Revealing that he is prepared to extend the scheme into other sectors in Singapore, Mr Chan said:

“Singapore has never limited top talent coming into Singapore…These are the people that we are looking at who can run huge project teams of hundreds and thousands of programmers. These are the people who can take technology companies to the next lap.”

Stating that the Government has been “tightening” the intake of lower- and mid-skilled foreign workers, the ruling party politician claimed that the “top” foreign talent that Singapore wants to import are “competing for Singapore” instead of taking jobs away from Singaporeans:

He said: “These are not people competing with the average Singaporean, these are the people who are competing for Singapore.”