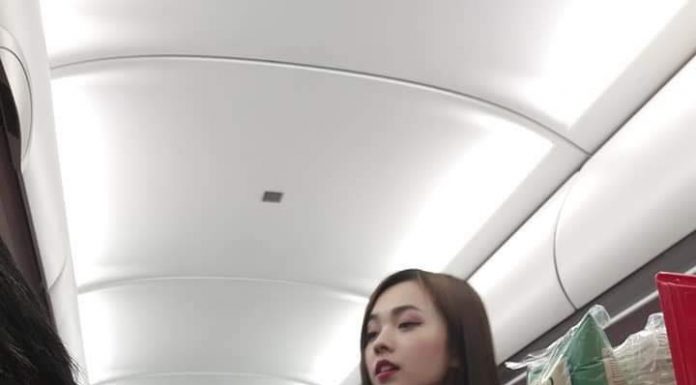 It’s funny how a picture is worth a thousand words, or a thousand likes, which hopefully will turn into added revenue for Air Asia. Traveller George Wong took a couple of candid snapshots of pretty flight attendant Mabel Goo at work, and posted them on his Facebook account on October 13.

Little did he know that the photos would go viral and be shared thousands of times, and even be re-posted in other online publications.

Mr. Wong photographed Ms. Goo talking to a passenger and then passing by with the food cart, without her knowing. In an obvious appreciation of her good looks, he captioned the photos with “Affordable fares with incredible scene, what else to blame.”

In the two days since he posted Ms. Goo’s pictures, the post has been shared almost 4,000 times, even on pages such as Penang My Hometown and Super E Media, where they have also been widely viewed and shared.

Ms. Woo, who describes herself as a “Freelance Dancer, Business Student, Flight Attendant” on her Instagram account, has seen the number of her followers surge in the last 48 hours.

Later on Mr. Wong apologized for the unexpected attention his post brought

Others were not quite so positive, and their comments bordered on sour-graping about Ms. Goo, wondering what she would look like without make-up

Another netizen expressed disappointment at the shallowness of the situation

Others found Mr. Wong’s action to be creepy, and one netizen even seemed to warn him about taking candid photos

Yet, one commenter was simply frank in his admiration of Ms. Goo