The Independent Singapore News
International Business & Economy Budget 2020: Some welcome them but others sceptical of schemes for older...

Budget 2020: Some welcome them but others sceptical of schemes for older people

During his Budget speech on Tuesday (Feb 18), Deputy Prime Minister and Finance Minister Heng Swee Keat announced several schemes for the benefit of elderly people in Singapore. Some netizens saw sense in the plans and were happy to receive the “goodies” from the Government but others were sceptical about the schemes.

Two of the schemes geared specifically towards the older population were the Senior Worker Support Package and the Matched Retirement Savings Scheme.

Under this package, employers who hire older workers will receive government funding from next year to offset wage costs and higher Central Provident Fund (CPF) contribution rates. Mr Heng said this is to help Singaporeans work longer, should they so desire.

The package includes the Senior Employment Credit, which will provide wage offsets of up to 8 per cent (dependent on employee age) for employers of workers aged 55 and above, and with monthly earnings of up to S$4,000.

Mr Heng also announced that a new Matched Retirement Savings Scheme will be rolled out to help the elderly with less Central Provident Fund (CPF) savings.

Lower- to middle-income Singaporeans from the ages of 55 to 70 who have not set aside the prevailing Basic Retirement Sum (BRS) will be eligible for the scheme, under which the Government will match every dollar of cash top-up made to a person’s CPF Retirement Account, to an annual limit of S$600.

The elderly (those 65 and up who have set aside a BRS at 55) who are CPF members can receive monthly payouts for the rest of their lives that cover basic living expenses.

Mr Heng noted that these “modest continuing adjustments” are necessary to keep up with basic retirement expenses.
He added that the Government was providing ways of “encouraging and augmenting family support for our seniors with fewer means in retirement”, so that they remain active and contribute to society and the economy as they age.

These schemes for the elderly were met with mixed reactions on social media platforms.
Firstly, many keenly felt the exclusion of citizens above 70 years of age in the schemes:

Others saw the schemes in a positive light:

Some were sceptical and questioned whether it would encourage laziness:

There were also those who disapproved of the schemes and discussed it with other concerned people: 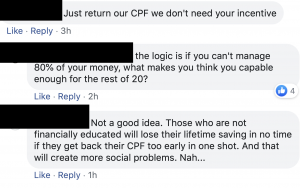 One netizen shared an interaction with an elderly Singaporean: He was not interested in topping up his CPF. The elderly man asked: “What if before you can withdraw you make a date with the undertaker??” 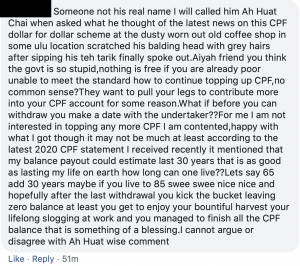