International Asia Activist Roy Ngerng, “Singapore is mini-China,” when it comes to speaking up

Activist Roy Ngerng, “Singapore is mini-China,” when it comes to speaking up 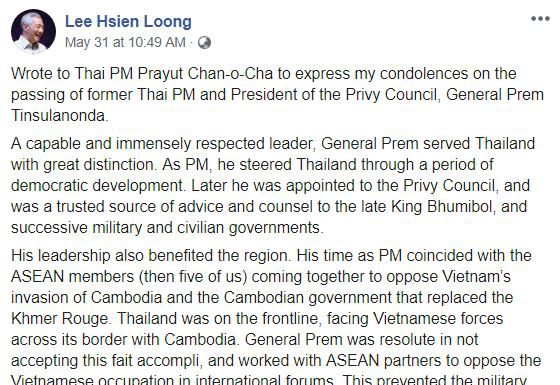 Mr Ngerng gave reasons why he believes this to be so, the foremost of which is fear of what the government would do should people “be inspired to protest”

Singapore— Roy Yi Ling Ngerng, a Singaporean activist who has been based in Taiwan for some years now, compared Singapore, Taiwan and Hong Kong when it came to freedom and democracy and drew analogies with China.

Mr Ngerng has been actively participating in the demonstrations in Taiwan in support of the protests in Hong Kong, posting photos of himself holding up a sign that says, “Don’t let Hong Kong be like Singapore, where people live in fear.”

On June 17, Monday, he wrote on his Facebook account comparing Singapore with Hong Kong—an understandable comparison, given the history and culture of both. He highlighted the longstanding tradition of protest that Hong Kong has, one that is notably absent in Singapore.

Putting it blankly, Mr Ngerng wrote, “Singapore is mini-China,” and gave the reasons why he believes this to be so, the foremost of which is fear of what the government would do should people “be inspired to protest.”

I wrote on Twitter about how Singapore compares with HK & whether HK's protests are doable in Singapore. I've compiled…

The activist went on to lay the blame on Singapore’s ruling party for inspiring that fear, saying that its IB (Internet Brigade) “are trying to demonize HKers,” and that, when he had gathered 5,000 Singaporeans for protests in 2013 and 2014, “we were charged & that effectively silenced the protests.”

“So, it’s a complex situation where many S’poreans are oppressed & unhappy, but effectively silenced & suppress any inspired thoughts out of fear & ironically some of the economically insecure become anti-PAP establishment & support CCP & even try to justify its authoritarianism.”

The future of Singapore, Taiwan, and Hong Kong

For Mr Ngerng, the situations in Singapore, Taiwan, and Hong Kong could become better in the future, or they can get much worse. Singapore has the least freedom of expression, and Hong Kong has the most, at this point.

He believes that Singapore today is what Taiwan was like before 1987, under the KMT, and therefore Singapore can become like Taiwan, “if it ever democratizes.”

Hong Kong, on the other hand, could end up like Singapore, if it “stops fighting & undergoes democratic regression.”

Again, he points to fear as a major cause of “psychological oppression & lack of solidarity in Singapore,” citing an Oxford survey which showed that out of almost 40 countries, Singapore is the second most scared of speaking up, “Due to the patchwork of laws, persecutions & fear-based propaganda.”

He gets to the heart of the problem:

“Less elections, HK has a de-facto democracy that allows it to learn to protest. But such structures aren’t available in Singapore & oppression coupled with the fear creates docility.

Fear has become subconscious & arrogance has become a way to overcompensate. I’ve asked two young journalists before if they’re scared. They said no. So I said would you write to criticize the government, they looked down and mumbled. Fear has created heavy cognitive dissonance.”

According to Mr Ngerng, despite the absence of public protest, the reality for many Singaporeans is that there is much to be unhappy about.

“But it’s not like Singapore has no unhappiness. Low-wage income has been stagnant for 20 years, the elderly have been chronically unable to retire for 10+ years, news reports of people choosing to die instead of seek healthcare, I don’t know if there isn’t long-standing unhappiness, or if…

.. Data shows that Singapore has the lowest wages, lowest retirement payouts, one of the highest private health expenditure, tuition fees, inequality, among developed nations, SMU estimates puts poverty at 20-35%. There is suppression of unhappiness, should it be the case?”/ TISG