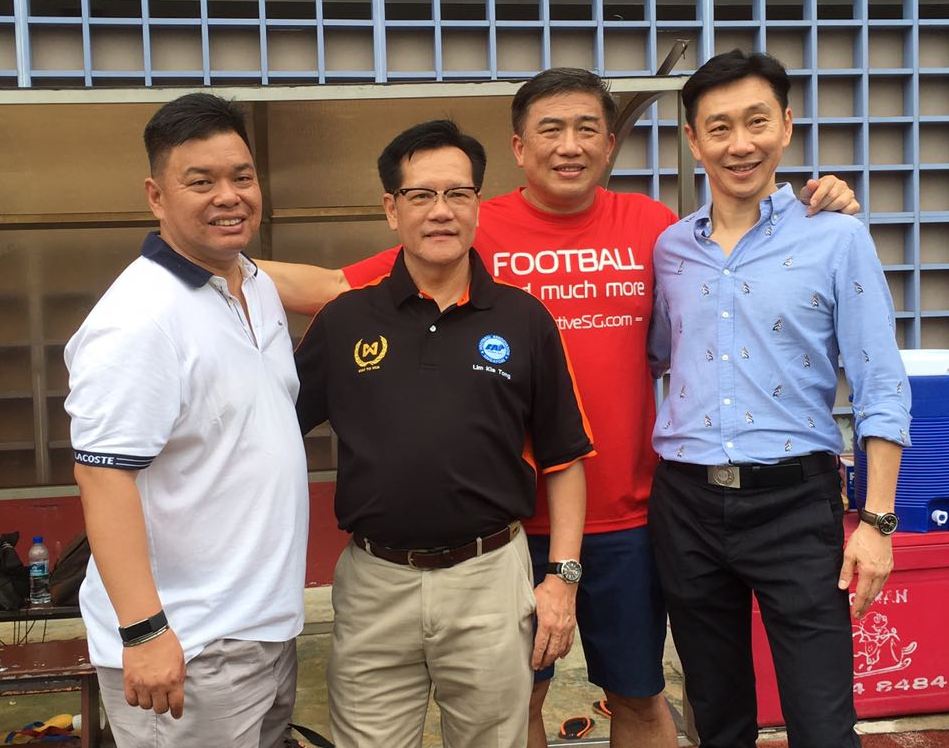 THE ‘Bill’ of football rights is here for the upcoming very much-delayed Football Association of Singapore (FAS) elections.

It has been dragged, rather extraordinarily, that even FIFA and AFC (which runs global football) have frowned at the Jalan Besar headquarters and, for the first time, the matter was even raised in the chambers of Parliament.

Finally, it’s on the cards. There will definitely be a minimum of a two-way confrontation when the deferred elections are held next month. A formal announcement is expected by this weekend.

In one corner, the incumbent of the FAS Transitional Council, lawyer Lim Kia Tong and on the other, flamboyant football-loving businessman Bill Ng.

I understand the two high-profile contestants came face-to-face during the weekend at a sporting event at Jurong East Stadium and the quicky conversation went something like this:

Lim Kia Tong (LKT): Bill, are you contesting me in the coming election?

Bill Ng (BN): Yes, because in football, we need two teams to compete.

One walked away smiling. The other was apparently red-faced.

Bill Ng, who is Chairman of S-League club Hougang United, is behind closed doors, a flaming regionally-known personality who believes in minimal words in public. As I know him, he has always let actions speak better than words.

And when The New Paper broke the news formally of his FAS President contest, not surprisingly, Bill kept reservedly silent and allowed only his spokesman to deliver a few words.

Perhaps the best shot-in-the-arm came when five-times S-League champions Tampines Rovers Chairman Krishna Ramachandra threw his weight around Bill in one of the clearest defining factors that a refreshing change is inevitable as democratic elections are held for the first time in over three decades.

Krishna, who reminded many die-hard football fans of the late Nadesan ‘Mr Kallang Roar’ Ganesan of the 1970s era, said: “I think there should be a contest if the circumstances demand it and my own sense is that the incumbents, have somewhat lost the faith and belief in the electorate, let alone the wider football fraternity.”

In a very honest appraisal of the incumbents, wherein Member of Parliament Zainudin Nordin was the FAS President during the last term, Krishna, a top-ranked corporate lawyer, who is Managing Director of Duane Morris & Selvam LLP in Singapore and of Selvam & Partners LLC in Myanmar, added: “Look, at the end of the day the incumbents comprise good people and volunteers and we should never attack their character or cast aspersions on their intentions.

“I know what it means to be a volunteer – it requires commitment and selflessness, so let’s not deny them these virtues.”

But Krishna feels, just like the majority of the 40-odd FAS-affiliated clubs set to cast their votes, that it’s the right time, on the 125th anniversary of the FAS, for a long overdue change.

He added: “However, I truly believe a change in leadership is required and, perversely, if not for anything else, for the perception that change has been effected onto the leadership. The wider fraternity demands that. Otherwise, football as a sport is going to suffer.”

Krishna’s candid advice to Lim Kia Tong and the FASTC (FAS Transitional Council): “Some selflessness and sacrifice is required by the incumbents – to honourably ‘take one for the team’ and step aside for the greater good. I say this with the greatest respect and admiration for the personalities within the incumbents, most of them who are and will continue to remain my friends.”

Bill Ng’s business and football track records beat Lim Kia Tong by a million miles as he’s a grassroots football personality who is respected for turning around debt-ridden clubs, with his most notable success coming at Hougang United (nicknamed ‘Cheetahs’).

Ironically, Lim has not be seen at S-League matches, like majority of the FAS council members, who has no sense of heartlander football, yet want to hold high office. This, in a nutshell, has proved to be the biggest downfall as the grassroots clubs want to give them the long-deserving knockout blow.

As they say, the proof is in the pudding: On the back of profitable jackpot operations, the Cheetahs are the only S-League club that can operate without the $800,000 annual subsidy from the Tote Board. In 2014, when Bill Ng took over the club, it registered a profit in excess of $2 million, and they have gone further, setting up a $1 million scholarship fund for young footballers.

Bill Ng is also a gentleman with a big heart: He has made donations to the late Singapore striker S. Anthonysamy, who was paralysed from the neck down after an on-pitch freak accident in 1996, and the late Zhu Xiaoping, a national gymnastics coach who was stricken by cancer.

And he walks the talk at his modest club. He has generously invested in facilities at the club’s Hougang Stadium headquarters, installing plush pitch-side benches and refurbishing their dressing rooms.

Style, too, he has as Bill Ng has ensured professionalism even in attire, to create the right first-impression, and his Hougang players and staff come for S-League matches in adoring black suits – the first professional club in Asean to dress football-fancy.

The FAS election will see teams put forward a slate of nine candidates – president, deputy president, four vice-presidents and three council members – with six other council member positions to be contested on an individual basis.

Bill Ng’s spokesman said: “A team line-up need not be announced prematurely for many reasons. But we have been announcing to key stakeholders and engaging many of them to explain our approach and what difference we can bring to Singapore football if we are voted in.

“Yes, sources will reveal some names of our candidates, but the final word must come from Bill Ng himself at the right time when he announces the full slate of team members.”

Bill Ng’s team manifesto is expected to be released when FAS announces the date for the elections, probably by the weekend.

But insiders said he will go on a strategy on a more structured S-League with clubs that are self-sustaining, a platform that could see a move towards higher professionalism in the club scene and have a distinct knock-on effect on the national team.

The spokesman added: “We have been ‘selecting’ (choosing the right candidates) and then ‘analysing and engaging’ (which can be called the training phase). We are now in the final phase of preparations which is ‘strategising’.”

Let the election showpiece get off the ground.

Let the FAS, by the end of this week announce the date of the polls.

Let even the high-powered calls from Parliament last week throw some commonsense along the corridors of the Jalan Besar FAS headquarters.

Suresh Nair is a Singapore-based journalist, who is very familiar with the “inside intricacies” of the FAS election contestants. He revels in serious thoughts of a long overdue football change. Follow us on Social Media