Minister says he grew up watching the footballer dazzle the world

Singapore — Law and Home Affairs Minister K Shanmugam paid tribute to football legend Diego Maradona, who passed away on Wednesday (Nov 25), and called him a “genius cut down by drugs” in a social media post on Thursday (Nov 26). 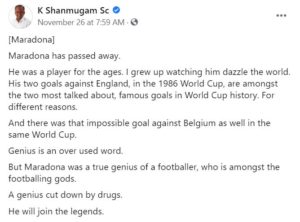 Maradona is widely regarded as the best football player of his generation and one of the greatest players of all time, although his “Hand of God” goal against England in the 1986 World Cup has been much criticised over the years.

He is a joint winner with the Brazilian player Pele of the one-off FIFA Player of the 20th Century award in December 2000.

However, Maradona was also a troubled character. He was banned in 1991 and 1994 for abusing drugs. From the mid-1980s until the mid-2000s, he was addicted to cocaine after allegedly trying the drug in Barcelona in 1983.

By mid-1984, he had full-blown drug addiction, which interfered with his ability to play football.

Maradona also suffered from the effects of alcohol abuse which took a toll on his physical and mental health. On May 8, 2007, he appeared on Argentine television and stated that he had quit drinking and had not used drugs in two-and-a-half years.

During the 2018 World Cup match between Argentina and Nigeria, however, Maradona was shown on TV behaving extremely erratically, with an abundance of white residue visible on the glass in front of his seat in the stands. The smudges could have been fingerprints, and he later blamed his behaviour on consuming lots of wine.

On Nov 2, 2020, Maradona was admitted to a hospital in La Plata, supposedly for psychological reasons. A representative of the former footballer said his condition was not serious. A day later, he underwent emergency brain surgery to treat a subdural hematoma.

Maradona was released on Nov 12 after successful surgery and was supervised by doctors as an outpatient but died of a heart attack at his home in Buenos Aires days later, on Nov 25, at the age of 60. /TISGFollow us on Social Media