Kindly note that we are not seeking any financial assistance regarding this situation. I just hope that MOH will consider reviewing existing policy on the usage of Medisave during old age, his son wrote.

Singapore — After being unable to use the S$46,000 in his MediSave account for a S$128 A&E bill, an 81-year-old man questioned if he would be able to even use the money to buy a coffin after he dies.

In a Facebook post by the man’s son, one Robin Lim, the elderly man visited the Accident & Emergency centre of Khoo Teck Puat Hospital (KTPH) with chest pains sometime in May 2021.

Mr Lim wrote that his father’s bill was S$128 after subsidies, and he was then informed that he could not use the money in his MediSave account to pay the remaining amount.

When his father called Mr Lim to ask why his MediSave could not be used to pay off the balance amount from the bill, “I explained to my father that usage of Medisave is NOT allowed for this situation due to existing policy, he highlighted that he is already 81 years old and does not have much years left to live for”.

“I feel I failed as a adult son to provide any logical/reasonable explanation to my father regarding this situation of Medisave usage”, Mr Lim wrote.

He went on to add that his 81-year-old father is not highly educated and “trusted the purpose of Medisave account introduced by Singapore government in 1984 and believed that his old age medical expenses will be taken care of by Medisave with sufficient balance in it”.

As such, Mr Lim wrote that his father was “extremely disappointed” to learn that he could not use the funds in his MediSave account to pay his public hospital bill.

“Kindly note that we are not seeking any financial assistance regarding this situation.
I just hope that MOH will consider reviewing existing policy on the usage of Medisave during old age”, Mr Lim wrote. 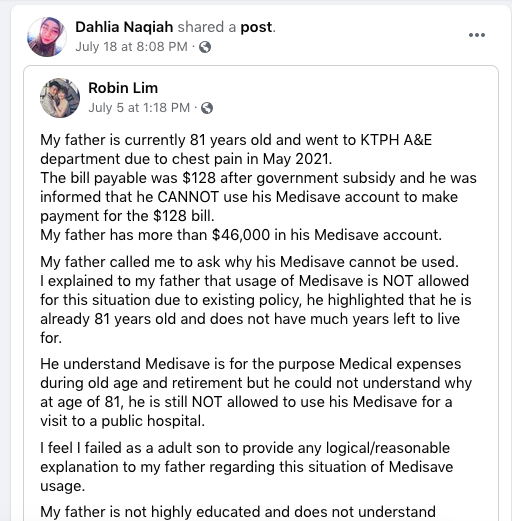 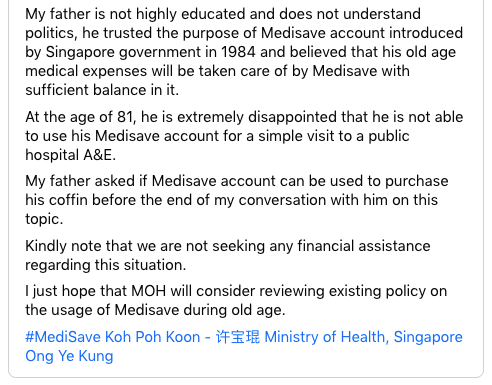 Though his post was initially written in early Jul, it was once again re-circulated and shared on social media on Sunday (Jul 18).

Netizens who commented on the post once again sought clarification from the Ministry of Health, as it seemed to be an issue that others were also unsure of. 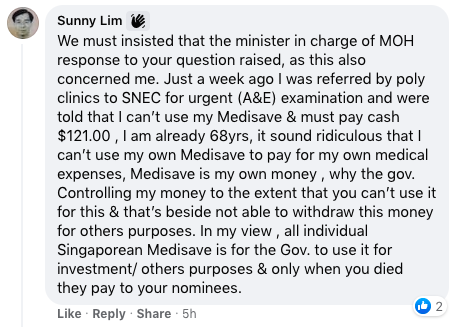 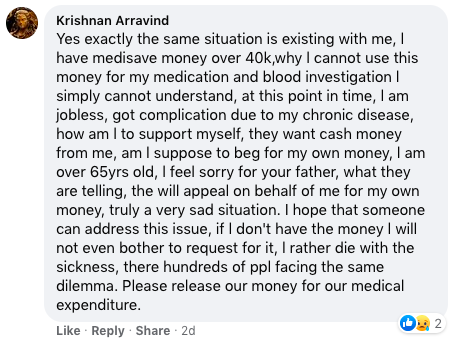 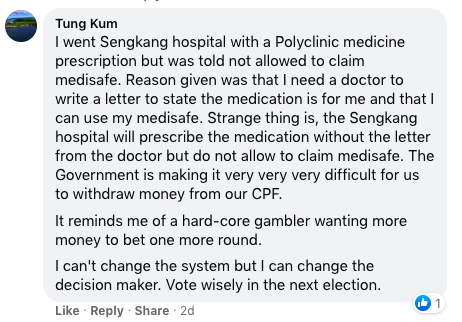 TISG has reached out to both Mr Lim and the CPF Board for comment and clarification. /TISG