Highlights on what people generally think of as customer service and product delivery from hell.

Singapore — It started with an order of doughnuts for last week’s Teacher’s Day, delivered 7 hours late to the wrong place, and not in great shape.

The woman who ordered the doughnuts first posted about her bad experience with the baker on Sept 3, which then went viral.

This was followed by a post on the COMPLAINT SINGAPORE Facebook page on Sept 5 (Monday), wherein a woman wrote about her best friend’s wedding cake, ordered from the same baker, that also arrived late to the reception venue, and did not look like what the baker promised.

Finally, another unhappy netizen posted about her negative experience with the baker, who was unable to collect the order she had placed from Sugarykneads, which operates out of a home in Rivervale. Moreover, she was kept waiting outside the home, while the baker got on the phone with the netizen’s sister to tell her they would not be able to make good on the order.

The owner of the bakery claimed that they’ve apologised and refunded the unhappy customers, but that they’ve been harassed after the posts were put up.

At present, the Facebook page of Sugarykneads can no longer be accessed, and the settings of its Instagram page, where glowing reviews of the bakery’s product could once be read by all, have been made private.

The first complaint came from a woman going by Lita Bear on Facebook.

“Bad service,” Ms Lita wrote, explaining that she asked that the donuts she ordered be delivered between 8am to 12pm. They instead arrived at 7pm at her house, and not at the school as she asked.

“Refer to attached pics to see the condition of donuts by then. Requested for refund but seller refused and said the donuts were just not up to my standards.” 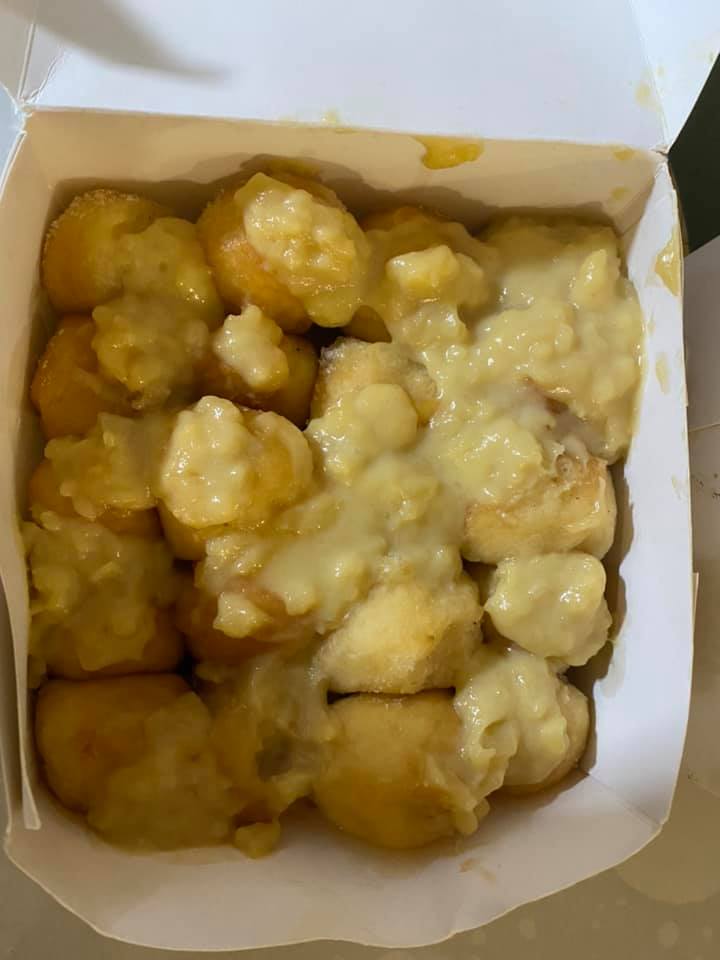 Four days after the botched order, the baker gave Ms Lita a refund, but also complained about her on IG stories. 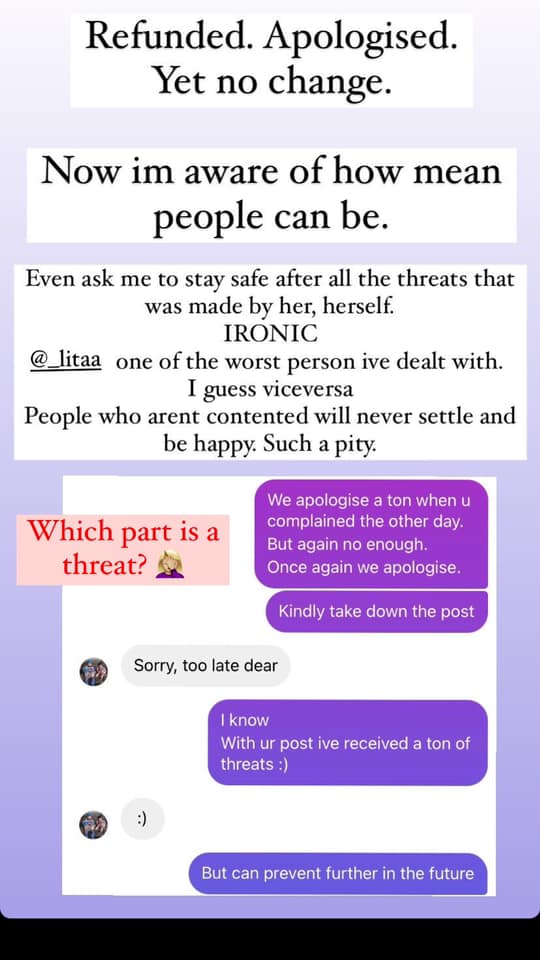 As for the wedding cake, a woman named Dee Rahman, who was a bridesmaid at the wedding, posted their story on Complaint Singapore‘s Facebook page on Sunday (Sept 5), highlighting the importance of doing due diligence when booking services online.

Ms Rahman said that her best friend, the bride, ordered a S$300 cookie cake for her special day.

“We don’t expect it to be replicated to the exact same but what we received was a nightmare,” she wrote.

Not only was the cake unlike the photo they agreed on, but it was also assembled late. Also, the number they were given to reach the baker during the event was also inaccessible.

They eventually received a refund of S$70.

While the third incident actually occurred in May, a woman named Shaa posted about it on Tuesday (Sept 6) also on the COMPLAINT SINGAPORE page.

She wrote that she lost patience with Sugarykneads after she was left waiting outside the baker’s door when she went to pick up her orders, which she had chosen to self-collect after there had been prior incidents with delivery.

But her order was nowhere near being ready. However, instead of speaking to her directly, the baker chose to telephone Ms Shaa’s sister, while she was kept waiting outside. 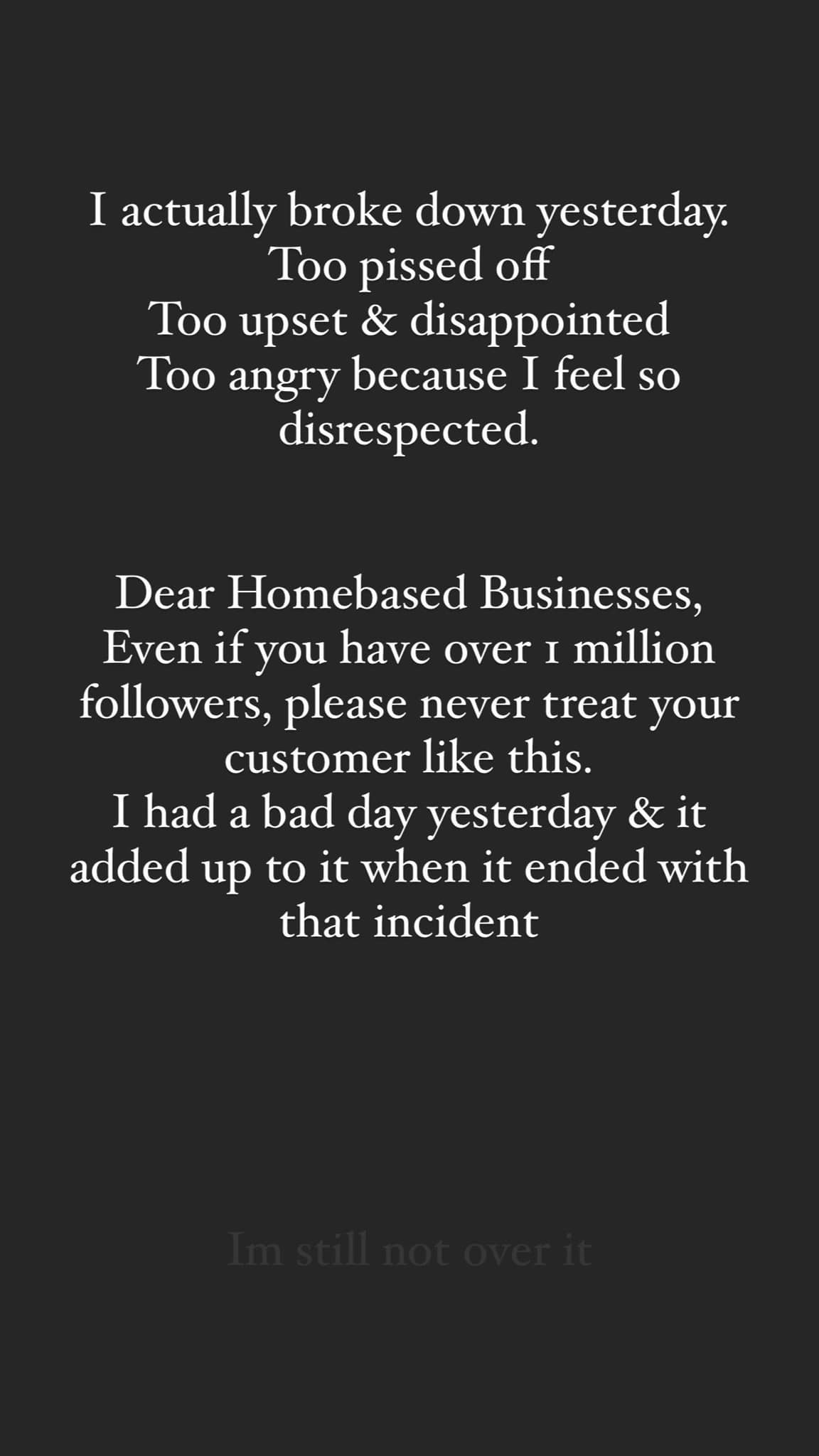 “I was sooooo mad because I am insulted that way…To her, she thinks an apology & refund for the bakes i dont get, will settle this, but you truly insulted me.

No one should be treated like this or any other ill-mannered way she has done. & This is to create awareness & for owner to have a sense of responsibility for her flaws.”

Ms Shaa told TISG that the baker did not even want to open the door and talk to her after she had spoken to her sister, which was puzzling because the baker had asked her to wait. 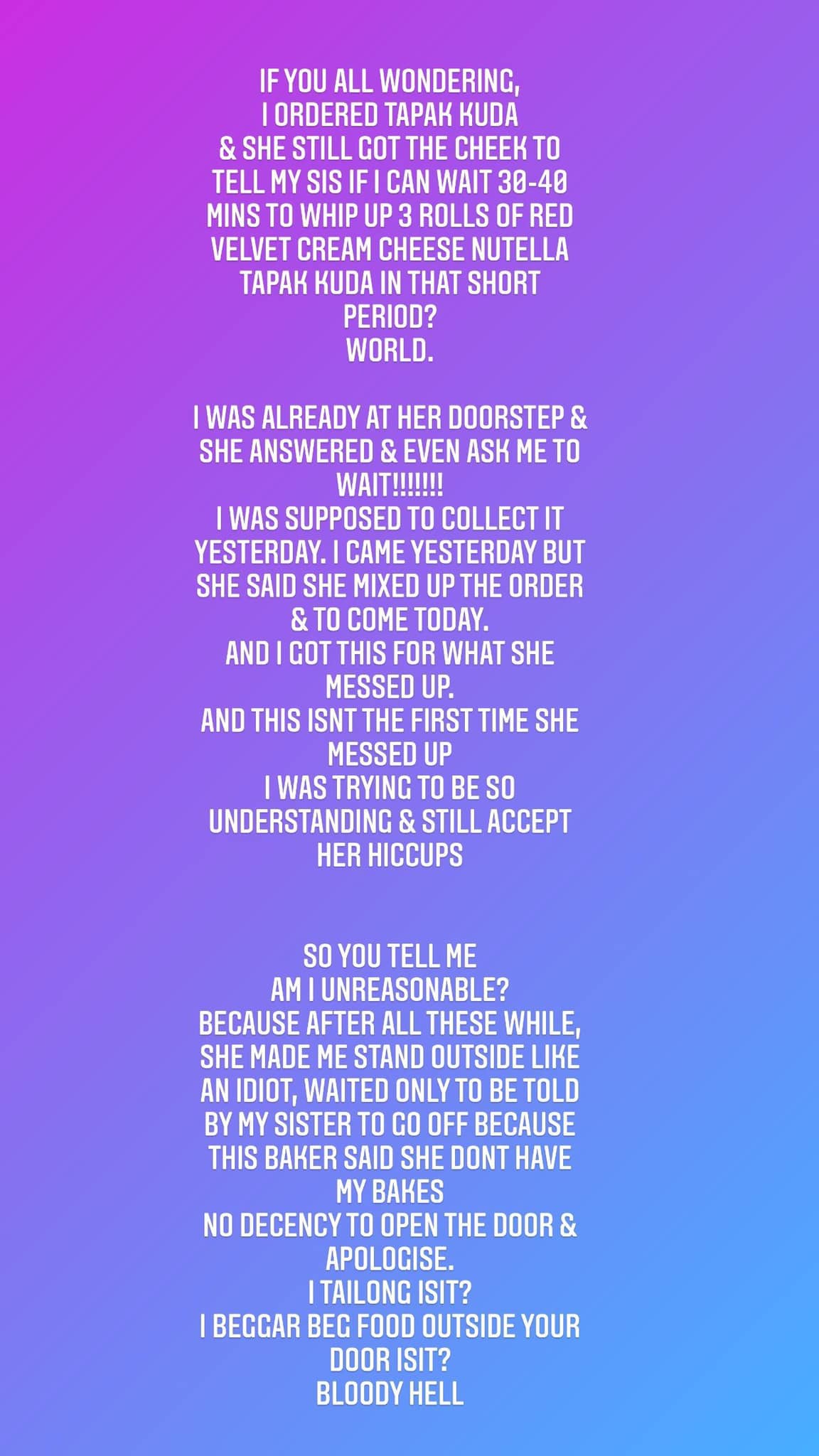 And to make matters worse, Ms Shaa added that she had been a regular customer who had supported the baker, whose business is only 6 months old, from the beginning.

“The wait was for nothing & i was left & ignored like that.. I was her regular customer & she did this to me, like I have no dignity or its like as though I was begging her for free food at her doorstep.

I have been nice, i never got angry or even be rude to her at all.

Even so, no one should be treated this way at all.”

In response to queries from TISG,  Sugarykneads said, “We will be lodging a police report on all the harassment we have received so far. Most of it is false accusations and threats.

We have made a full refund and apologise tremendously to those who were affected with our service. We have done to the best of our ability as a company. We sincerely apologise to all once again.”

Singapore  – Xavier Yap Jung Houn, 48,  father of the twin boys found dead near a playground in the Upper Bukit Timah area, was taken by police to the canal where the bodies were found. On Thursday at about 3.10pm,...
Read more

In a new interview, Lakshya Sen, who beat World Champion Loh Kean Yew at the India Open earlier this month, admitted that he felt...
Read more

Singapore – Most people facing the kind of legal charges that YouTuber Dee Kosh does would keep mum and...
Read more

Singapore — A new study from a global jobs portal finds  that more than half of the respondents in...
Read more

In a new interview, Lakshya Sen, who beat World Champion Loh Kean Yew at the India Open earlier this...
Read more
Follow us on Social Media