PAP member Shamsul Kamar has drawn flak for not checking the accuracy of the Tamil words in flyers that he distributed during home visits at the Kaki Bukit division of Workers’ Party (WP)-held Aljunied GRC.

The door hanger-style leaflet that Shamsul left at homes in the Kaki Bukit area said that Shamsul came to meet with the resident but the resident was not home at the time of the home visit. This flyer also asks residents to inform Shamsul if there is anything he can help them with and lists his contact details.

The message is printed in the four language of English, Malay, Chinese, and Tamil, in the flyer. The grossly misspelled Tamil translation in the flyer sees many characters switched around that ultimately results in ‘gibberish’ words that has no meaning whatsoever. 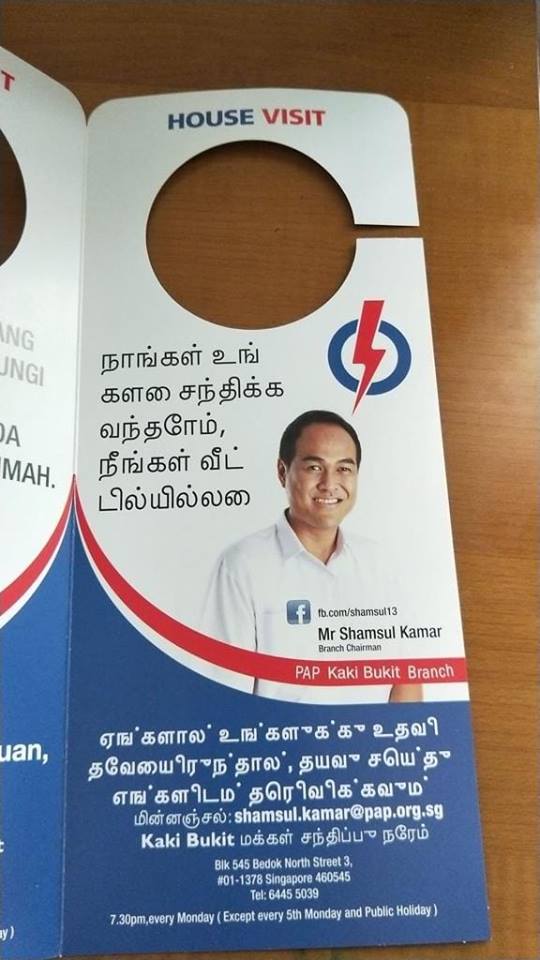 Sharing a picture of the flyer’s Tamil page on social media, Facebook user Saravanan Naturopath wrote: “This is an insult to Indians. If you have so much money to print this advise, you could have considered putting the Tamil right. What a shame? You mean you do not anyone who knows Tamil in your circle? What an insult.”

Another netizen who shared a picture of the flyer, Facebook user Hairun Bathusha, wrote: “A primary 1 Tamil student can do a better job than Google Translate.”

Facebook user Rajeswaran Veerasamy, another netizen who posted the picture, pointed out that this blunder comes as Singapore celebrates her bicentennial history. The sentiments expressed by Saravanan, Hairun and Rajeswaran were shared by several netizens who were shocked by the errors: 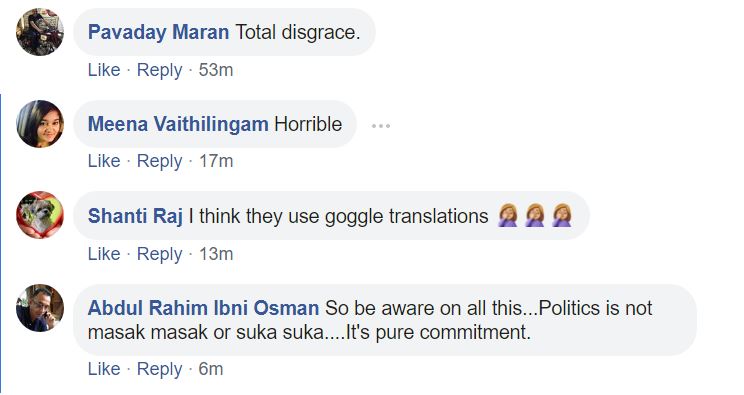 This possibility is still not an adequate explanation as to how the errors could escape the notice of the team preparing and printing the flyer or Shamsul’s grassroots team and volunteers who distributed the flyer.

It is curious that no one spotted the errors and even more disturbing that Shamsul or his team did not seek confirmation with someone who knows Tamil that the translation is accurate.