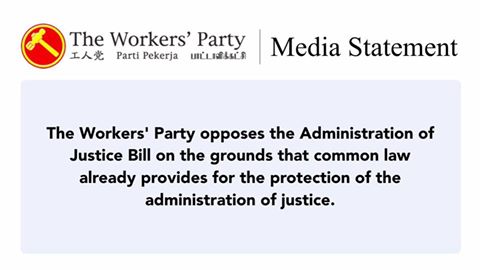 The Workers’ Party (WP) opposed The Administration of Justice (Protection) Bill which was passed in parliament yesterday (15 Aug). WP believes that this bill is not only unnecessary, but that it also gives to the executive and the police powers that they currently do not have that would have a chilling effect on fair criticism and public discussion.

WP MPs argued in Parliament yesterday that if enacted, this law runs a very high risk of causing the unintended consequences of undermining the public’s trust in the Government in the long run.

The following are snippets of the argument the MPs from the opposition party made in not supporting the Bill.

Assoc Prof Goh denounced the Bill’s broad definition of “publish” to cover personal electronic communication and social messaging between friends. He cited an example of a young person who has died in an event following the acts of public officials, and asked whether a concerned member of the public or even the father of the child would be risking sub judice contempt if he questioned the authorities in good faith.
Read the full speech here: http://bit.ly/2b8ZTyz

Mr Tan rebutted the point that the Bill is required to guard against prejudice or interference with pending court proceedings. He said that the fact that the proceedings are heard by professional judges has been portrayed as irrelevant. He further argued that we should have full confidence in our judges – and that in fact, this same confidence was what the earlier PAP government under Mr Lee Kuan Yew had sought to achieve when they did away with juries.

Leon Perera brought up 2 changes resulting from this Bill: Firstly, the setting out of intimidating maximum penalties. Secondly, strengthening the executive government at the expense of the Courts in contempt proceedings and enabling the use of the Police to investigate contempt, which is not the case now.

Sylvia Lim slammed the Government for giving the Police more unnecessary work even though there has been much talk about the heavy workload and manpower shortages faced by the Police, in recent years. The Bill provides that the Police may now investigate potential offences relating to sub judice contempt.

Mr Singh took the Government to task on its record on civil liberties. An example he referred to was how the Protection from Harassment Bill was passed with justifiable reasons such as to protect individuals from abusive behaviour, but was later used by the Government to claim harassment from a member of the public in a dispute over a mere patent.