Singapore — A young woman has taken to NUSWhispers to seek validation after she comforts a stranger on the train by hugging him.

In her submission, which was posted on Saturday (Jan 16) and has garnered almost 1,000 reactions, the 23-year-old Chinese woman, who described herself as “nice-looking” and “single by choice”, wrote that she was on the way home when she noticed an Indian man crying silently in the train.

She wrote: “He was trying to hide it but it was clear to me. I took a seat next to him and asked him if he is okay. He did not respond. So I stood up and hugged him close to my chest. Then he started to cry more and more audibly.”

“It was messy indeed with tears and mucus. But it did not bother me. I was more concerned he may end his life or do something drastic. I kept hugging him till the end of the journey”, she wrote.

She added that, towards the end of his journey, he had calmed down enough to force a smile and thank her.

The man said he was planning to end his life that day as he had a number of problems financially and with his family. “He said he did not know nice people like me existed. He said he sees the world differently and he will now try to live and press on,” she shared.

The young woman said that, when she related what happened, her family and friends made racially derogatory comments, or even asked if the man had molested her.

“I feel sad getting all these negative comments. I would have given a hug no matter who it is — old or young, ugly or handsome, ugly or pretty, male or female. Race is also not an issue for me,” she said.

“I need validation that I did the right thing. So I post it online,” she wrote on NUSWhispers, where people, presumably NUS students, submit their anonymous “confessions”.

Indeed, she did get the validation she sought online. Many who commented on the post praised the woman. They shamed her family and friends for their comments about her deed. 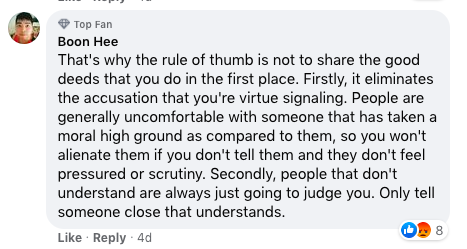