The Independent Singapore News
Home News SG Politics Why have GRCs if minority MPs can't speak up on minority issues?

Why have GRCs if minority MPs can’t speak up on minority issues? 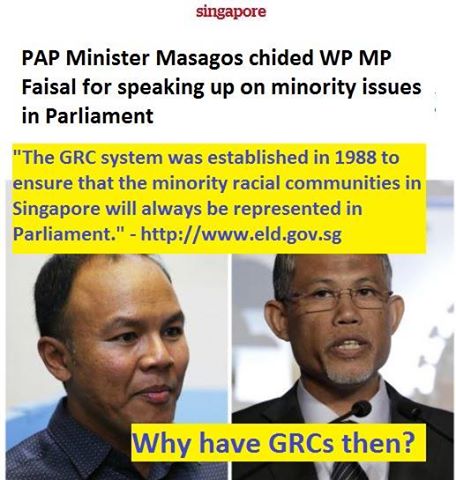 This week, when WP MP Muhammad Faisal spoke up against the ban on the wearing of tudung in certain occupations here, PAP Minister Masagos Zulkifli rebuked him for “subtly and frequently needling” the Malay community with this issue.

Minister Masagos said that Parliament is not the the platform to discuss such issues. He further implied that MP Faisal is sowing discord and disrupting Singapore’s racial and religious harmony.

According to the Election Dept, which comes directly under the purview of PM Lee, the GRC system was “established in 1988 to ensure that the minority racial communities in Singapore will always be represented in Parliament”.

WP MP Faisal was the minority GRC candidate elected by Aljunied residents to ensure that their Malay community will be represented in Parliament.

So, when MP Faisal is talking about issues related to the Malay community, how is he sowing discord? And why can’t he bring minority issues up in Parliament?

That being the case, why are we having GRCs in the first place?