Container ship hit another vessel and the crane

Taiwan – A video of dock workers running for their lives at the Port of Kaohsiung as a massive container crane collapsed has gone viral on social media.

Taiwanese police received a report at about 11 am on Thursday (Jun 3)  that a dockside gantry crane had collapsed at the Port of Kaohsiung’s Pier 70, according to Taiwanese television channel TVBS.

As the container ship Durban, operated by Orient Overseas Container Line (OOCL), made its way to Pier 66, it veered off course and sideswiped the bow of another container ship, YM Constancy.

YM Constancy was docked at Pier 70 near the container yard of Yang Ming Marine Transport Corp.

As the Durban continued to scrape against the YM Constancy, her bridge began to collide with a docked crane’s boom.

It was reported that the Durban’s pilot was unable to veer off on time and halt the vessel’s momentum.

A video of the incident showed the container crane GC8 suffer from a structural failure and collapse onto the dock, smashing another crane, GC6. 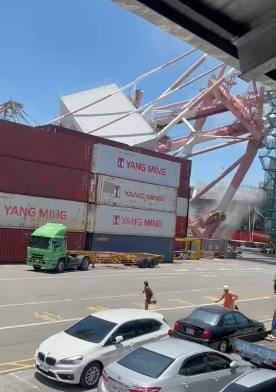 Dock workers were captured on camera, running for their lives to avoid being hit by the containers and debris.

A 58-year-old dock worker suffered from a laceration on his right arm, reported Taiwan News. He was taken to the hospital.

Two engineers were also trapped inside the crane after the accident occurred.

Rescuers used a 60-metre mast-type jib crane to extricate the men from the wreckage. Reports confirmed they did not sustain major injuries./TISG