The video shows throngs of men eating, walking and standing around together, with no social distancing whatsoever A video taken of the workers crammed in to supposedly the S11 Dormitory @ Punggol made its way round the internet yesterday (Apr 7).

In the video, throngs of men were seen eating, walking and standing around together, all with no social distancing being practiced.

According to a straitstimes.com report, workers said rooms were infested with cockroaches, rubbish was piling up, and toilets were overflowing.

In its report, The Ministry of Health (MOH) announced on its website in the evening of April 7 that the country has 106 new cases of the coronavirus. The biggest increase was linked to the cluster at S11 Dormitory @ Punggol (2 Seletar North Link), which now has 98 confirmed coronavirus cases, MOH said.

Movement between blocks is prohibited and workers have been advised to “cease social interactions with others who do not reside in the same room or floor”, said a joint press release from the MOM and the Ministry of Health.

Many netizens commented on the state of the dormitories, adding that it looked like they were in a prison and seemed like a human rights issue to cram all of the workers into the same place.

Others also said that the lack of space and social distancing would likely lead to more Covid-19 cases, increasing the cluster. 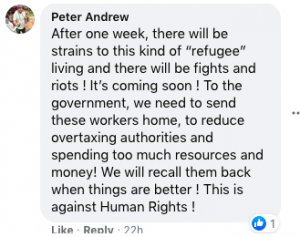 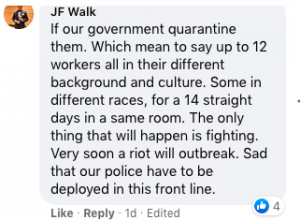 When asked about the situation on Tuesday (Apr 7), Minister of State for Manpower Zaqy Mohamad said in the same ST report that conditions at the dormitory in Punggol could have been better maintained while it was being turned into an isolation area.

Mr Zaqy said conditions at the dormitory were found to be satisfactory when the last inspection was done on March 4.