Very little protection for out of work employees in Singapore, activist laments 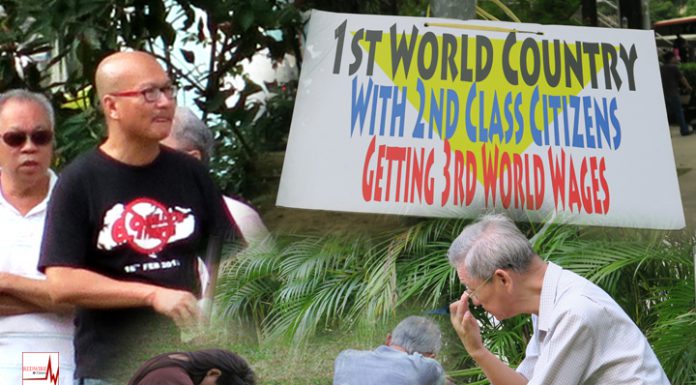 The following is an interview with Gilbert Goh, founder of Transitioning (a website which helps retrenched workers in Singapore).

—
Q1) What is the typical profile of unemployed people in Singapore?

Typically, the unemployed PMETs here has at least a degree or diploma, speaks reasonably good English and in his early 30s to late 40s. Most who are jobless in their 50s probably will switch to driving cabs or semi-retired in their own way.

Many may even have consider moving abroad for a lower cost of living if they are independent and without a family here.

Q2) Do you think that the locals are being discriminated in Singapore? Any personal experience?

I wouldn’t say blatantly that Singaporeans are being discriminated during the hiring process but we have heard of local PMETs not selected by a foreign employer and this is more prevalent if the hirers are from Asian countries eg India or Philippines whereby the communal spirit is very strong. The saying goes that they tend to hire their own kind.

We have received emails from PMETs saying that they are been replaced by a incoming foreign talent due to either to lower cost or performance or both. Naturally they are pissed and wrote in to us stating their frustration.

Q3) Do you think that the law protects the unemployed locals in Singapore?

There is nothing much in place actually that protects unemployed locals. There is no quota for employers hiring EP foreigners like the S Pass kind whereby you need a X number of locals before you can hire a foreigner.

In countries like Australia, you need to show that you have advertise prominently and go through a certain number of local candidates before you are allowed to hire a foreigner. The whole process may take 3 to 4 months before you can hire a foreigner over there.

Here, the employer only needs to advertise a position for 2 weeks before he is allowed to hire a foreigner. Its too short and is not really a real deterrance for employers bend on wanting to hire a foreigner to work here. A waiting period of say 2 to 3 months is more reasonable.

There are all kinds of incentives for employers wanting to hire a foreign chief of which is the sole availability of the FT as local male PMETs need to serve their reservist liability.  Employers also don’t have to pay employer CPF and more importantly may be able to get their relatives in to share the country’s spoils.

Q4) Should the employment laws protect the locals in Singapore?

There should probably be more protection in place for both locals and foreigners in the area of unfair dismissal. I am sure that both share the misery of being unfairly dismissed by their employers and right now there is no place for proper arbitration.

There is no proper union representation, no Ombudsman and everything is skewed towards the employers. Our NTUC and TAFEP are both incompetent and lack the teeth to arbitrate firmly for aggrieved employees during a labour dispute.

Q5) Using me as a hypothetical case study, what are the chances of me (a foreign degree holder) being unemployed in Singapore?

If you belong to a Ivy League background, I am sure that you will be snatched up quickly in no time but if its just a normal foreign uni graduate my fear is that you may have to join the unemployment pool unless your degree is very specialised like medical or legal field.

The civil service also prefers local graduate from a local uni so its rather tough for alot of fresh young graduates hailing from foreign uni to enter the service.

They have to compete unfairly with the surrounding region to enter the private service whereby there is no employment protection at all. for our local graduates.

If you have the option to stay on in your place of study and gets hired, you should explore that choice seriously. Singapore is now a easy haven for foreigners seeking employment due to the 6.9m population target by 2030 and it comes at a huge disadvantage for our young graduates.