While trawling through the Picture Archives Singapore Database for some research on past elections, I came across these two comics that were part of the People’s Action Party (PAP) 1963 elections campaign. 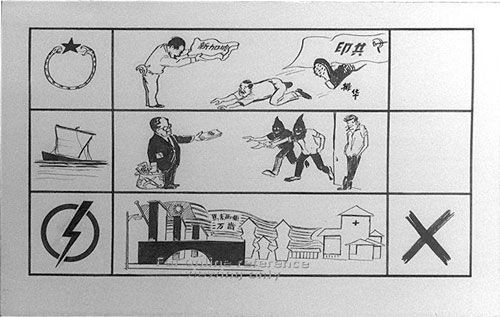 This comic resembles a polling card and persuades voters to choose the PAP (marked with a ‘X’) by equating its logo with a modern city of schools, HDB flats, infrastructure and religious sites. As this elections was held just five days after Singapore merged with Malaysia, the city’s background appropriately depicts the Malaysian flag.

In contrast to the PAP, the comic also illustrates its opponents the Barisan Sosialis and the Singapore Alliance as communists and corrupt respectively. The Barisan’s logo becomes a two-headed snake and is accompanied with a graphic that shows them presenting Singapore to the communists. As for the Singapore Alliance, its boat logo has weak sails, while its candidates are depicted as rich people who give away money to hooligans.

This second comic promotes the progress Singapore has made under PAP’s rule since it came into power in 1959. Again, the image of the modern city is used, this time in the background, while the foreground shows how corruption, lies and the unpatriotic have been crushed or surrendered.

Comparing these comics with how election posters evolved over the years, there is a shift towards ‘looking objective’ and ‘professional’. Nowadays, campaign materials make no reference to the opponents, and photographs are used instead, even if it’s a composed image like the this 2006 poster. Of course, another reason is because these technology (e.g. Photoshop, photography) are now more readily available than in the ’60s.

If there’s one thing that hasn’t changed in these posters is the use of the modern city as a backdrop in a PAP election visual —  a reflection of urbanism as a integral tool of this political party.

—
Editor’s note: This was the PAP’s backdrop for their GE2015 lunchtime rally at Raffles Place.

—
Republished with permission from Justin Zhuang’s website.Follow us on Social Media