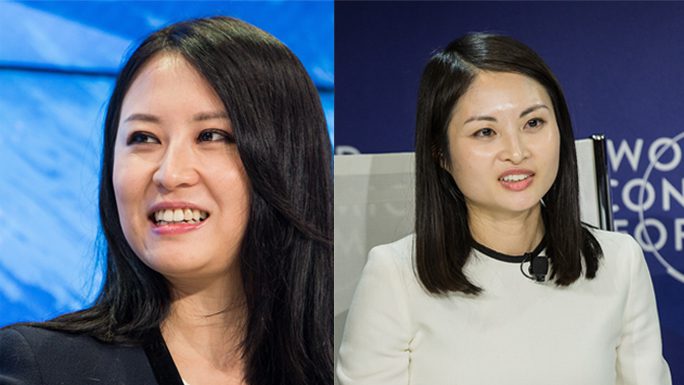 At the World Economic Forum (WEF) Annual Meeting 2018 which concluded last week in Davos, Switzerland, two women caught our eyes. They are women at an event where men made up 80% of the participants. They are young, confident, eloquent, and of East Asian ethnicities. They showed expertise in their fields and gave insightful speeches at the forum. A further check on their backgrounds and it is safe to say – we are blown away.

Jin Keyu is an Associate Professor (with tenure) of Economics at the London school of Economics (LSE). Born in 1983, she hails from Beijing, China, and obtained her B.A., M.A. and Ph.D. from Harvard University. Her research focuses on international macroeconomics and the Chinese economy. She completed her Ph.D. when she was 25 and became the youngest ever tenured professor at LSE when she was 29.

Jin has had prior experience at the International Monetary Fund (IMF), the World Bank, the New York Federal Reserve, Goldman Sachs, as well as other financial institutions. She was named Young Global Leader by the WEF in 2014. The Young Global Leader programme is a five-year programme that identifies 100 young leaders each year, under the age of 40, who are finding innovative ways to tackle the world’s most complex challenges.

On top of Chinese and English, Jin also speaks French, Spanish and Italian. She plays the piano and clarinet.

At the Annual Meeting, Jin participated in the panel “The Global Impact of America First”, where she discussed the effects of Trump’s “America First” trade policies, particularly on China. She also joined IMF Managing Director Christine Lagarde and US Secretary of the Treasury Steve Mnuchin in a separate panel “The Remaking of Global Finance”.

Born in Hong Kong in 1979, Carol Li Rafferty holds a B.A. from Yale University with a double major in Economics and International Studies, and a Doctor of Jurisprudence (J.D.) degree from Stanford University Law School.

Li Rafferty is the inaugural Managing Director for Yale Center Beijing, which she opened when she was 38 weeks pregnant. Prior to this, she has worked in both the US and China in the finance, law, and government sectors. Li Rafferty was named WEF’s Young Global Leader in 2016. She is also a member of the Young Global Leader Advisory Group.

In addition, Li Rafferty co-founded Lean In China in 2013. Lean In China engages more than 100,000 women across China in professional support networks, encouraging them to “lean in” by taking on leadership roles. Li Rafferty was inspired by the book “Lean In” written by Sheryl Sandberg, Chief Operating Officer of Facebook.

Li Rafferty’s grandfather is Ronald Li Fook-shiu, founder and former chairman of the Hong Kong Stock Exchange. She is married to Colm Rafferty, Vice-Chairperson of AmCham China, also a graduate of Yale University.

At the Annual Meeting, Li Rafferty addressed the question “How is China Leading the World?” one year on from President Xi Jinping’s landmark speech at the 2017 WEF.

Aside from the two Young Global Leaders, there are two outstanding women also worth looking out for.

Fei-Fei Li shared at the WEF how leaders should wield Artificial Intelligence (AI) to benefit not only businesses but also every individual.

Li is a reputed AI scientist worldwide. She is an Associate Professor of Computer Science at Stanford University and Director of the Stanford Artificial Intelligence Lab. She works on computer vision, cognitive neuroscience and computational neuroscience. Among her best-known work is the ImageNet project, which has revolutionised the field of large-scale visual recognition.

Li is currently on a stint at Google Cloud AI and Machine Learning as Chief Scientist. Born in 1976 in China, she completed her B.S. in Physics from Princeton University and her Ph.D. from California Institute of Technology. In 2015, she was named Foreign Policy magazine’s Top 100 Global Thinkers and in 2017, the Chinese Overseas Personnel 50 People List.

Li Xin moderated the panel “The Belt and Road Impact”, which Singaporean Minister Chan Chun Sing participated in along with Jin Liqun and other speakers.

Now the Managing Director of Chinese media company, Caixin Global, Li received her B.A. in English from Tsinghua University and M.A. in Journalism from the University of Missouri, Columbia.