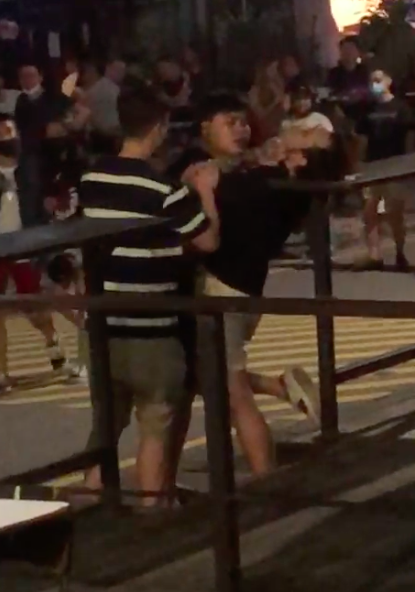 Two Singaporeans were arrested on Sunday (June 21) in connection with a fight that broke out in Holland Village on Friday night, the police said in a news release.

The two men, both aged 22, were arrested for their “suspected involvement in a case of affray” at about 10.50 pm that day in the area’s Lorong Mambong.

In a two-and-a-half-minute video circulating online, men can be seen shoving and attacking one another, while others try to separate them. They were watched by a large crowd. At about 30 seconds into the clip, one of the men can be seen pushing another by the neck at the edge of a barrier that served as a table. At one point, towards the end of the video clip, other people were seen getting involved. Some of those who had been fighting were also seen lying on the road.

Singapore had on Friday entered Phase 2 of the relaxation of circuit breaker measures to curb the spread of Covid-19. Under this phase, the authorities allowed the reopening of shops and food and beverage outlets. At the latter, a maximum of five customers could sit at one table.

Holland Village is a popular nightspot. The many people who were there that night were probably celebrating their first night out since the circuit breaker was imposed on April 7. It was the first time they could go there in about two-and-a-half months.

A Straits Times report quoted the manager of the British India Curry Hut restaurant, which was ordered closed for dine-in customers until June 28 for not ensuring safe distancing measures, as saying that the crowds outside the restaurant were there watching the fighting.

There were apparently two fights that night.

According to the police, the men who were arrested would also be investigated for possible breaches of safe distancing measures.

The offence of affray under the Penal Code carries a jail term of up to one year, a fine of up to S$5,000, or both.

The offence of causing annoyance to the public when drunk under the Liquor Control (Supply and Consumption) Act carries a fine of up to S$1,000, a jail term of up to six months, or both. /TISGFollow us on Social Media