Minister met train-loving boy to give him a birthday treat

Singapore—Transport Minister Ong ye Kung penned a Facebook post on Wednesday (March 10) about giving an eight-year-old boy who loves trains a birthday treat by meeting up with him at Canberra MRT station on a weekend afternoon.

The boy was so thankful that he sent Mr Ong a hand-drawn card with trains.

He added that he would like to work for the Land Transport Authority (LTA) one day.

Not only did the encounter delight the young boy — the Transport Minister wrote that it made his day as well.

Understandably, the post has got much positive attention from the online community. It has been shared over 600 times.

One of the people who commented on Mr Ong’s post was Ambassador-at-Large Tommy Koh, who wrote, “OYK is a great leader”. “Indeed,” agreed another commenter.

In his post, Mr Ong recalled how he met the boy.

“A loving young father wrote to me a few days ago with a request – his son would be turning 8, he loves trains and hoped to meet the Transport Minister.”

Mr Ong then arranged to meet the boy and his father on a Sunday afternoon at the Canberra MRT station.

During their time together, “He peppered me with many questions about trains but honestly he knew more than me,” wrote the Transport Minister.

Mr Ong posted a photo of the card the boy had drawn, which had been “nicely laminated, with all the train models indicated”. The boy had written, “Dr Mr Ong, I drew this for you,” on the card.

The minister added, “His father later told me that our meeting made the boy’s day. Well, it made mine too.

Netizens thanked Mr Ong for going out of his way to meet the boy, especially on a Sunday. 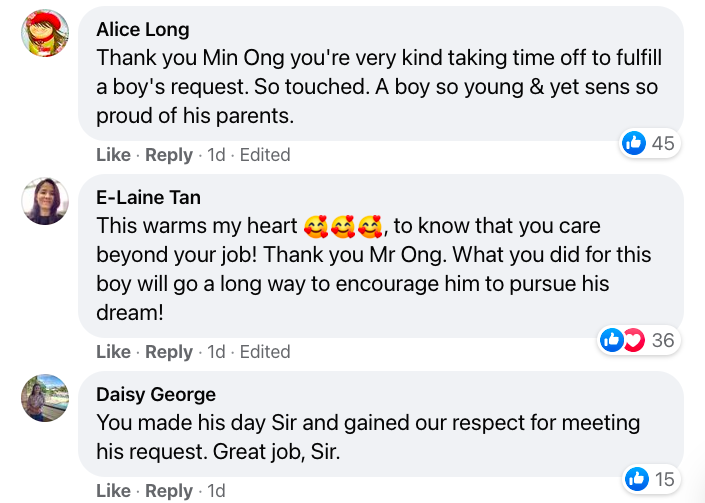 Others also praised the boy’s father for encouraging him to pursue his interests.

One commenter, a teacher, wrote that the boy would never forget the encounter with Mr Ong.