The Independent Singapore News
Home News The hoo-ha over the Apple Store launch in Singapore, in tweets

The hoo-ha over the Apple Store launch in Singapore, in tweets 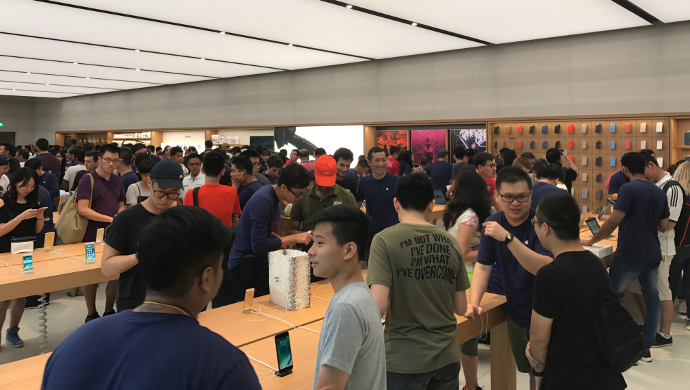 After months of preparation and hype, the first Apple Store in Southeast Asia has finally launched with great fanfare. It is located right in the heart of Singapore’s shopping district Orchard Road.

This reporter braved the crowds and jostled with the Apple fans (just kidding) to bring you a quick peek into what is arguably the most anticipated opening of any retail store in this country.

Here they are in tweets.

The queue at the Apple Store Orchard launch is pretty sick! pic.twitter.com/5LpAcw2RnP

Some of the more ardent Apple fans actually queued up overnight! The horror!

10 minutes later, I am still nowhere near the front of the Apple Store Orchard queue pic.twitter.com/E2Ewtkr2gS

Patrons snaked through the long queue. But luckily, it moved fast. Curious onlookers were snapping pictures outside the store.

Apple Store employees attempted to rouse the crowd by break into loud cheers — with almost religious fervour — and high-fives. Most of the patrons obliged — some, begrudgingly (it’s just a frigging retail store, after all).

Apple Store Orchard really knows how to give the sheepies a grand welcome and make them feel like VIP pic.twitter.com/JpqZCUdNcC

I have to admit: Apple really knows how to roll out the red carpet for its customers. It’s hard not to get caught up in all the feverish excitement.

I finally made it into the store. It looks, well, pretty neat, I guess.

Though to be honest, on first impressions, it doesn’t look too different from any licensed third-party Apple retailer.

Not the kids! Spare the kids please! pic.twitter.com/YJrQfSactD

No! Don’t indoctrinate the kids, too!

There is a spiral staircase that leads to the second level.

A view of the queue from the second level pic.twitter.com/KzU8tm3kZm

Here is a view of the queue from the second level of the store.

There are free classes to help you get acquainted with your Apple products! pic.twitter.com/odPKIqjNSS

There are free classes that teach Apple users how to use their products.

Here’s a giant LED screen to show off how cool Apple’s advertisements are — because it can.

Rows and rows of accessories adorn its walls pic.twitter.com/aQrrIYDQD9

There are walls and walls of Apple accessories. Take your pick.

Apple’s knack for awesome designs and aesthetics is on full display here.

An overview of the second level pic.twitter.com/oXJFGvj3H2

Did I mention every patron gets a free Apple t-shirt regardless of whether they purchase an item? Sweet!
—

The post The hoo-ha over the Apple Store launch in Singapore, in tweets appeared first on e27.