The photos were allegedly taken without the subjects' knowledge or consent and circulated in a Telegram group called ‘G.R.O.C’

A temporary staff member of Cold Storage has been dismissed after he allegedly circulated photos of female patrons in a group chat.

The photos were allegedly taken without the subjects’ knowledge or consent and circulated in a Telegram group called ‘G.R.O.C’. The group chats also had lewd comments on some of the photos.

The images were taken at the Cold Storage outlet at Rail Mall. 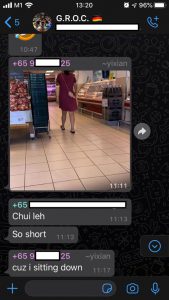 In response to media queries, a Dairy Farm spokesperson “We take the privacy and safety of our customers very seriously and do not tolerate this kind of behaviour,” said the spokesperson.

They added that the person has been removed immediately. According to screenshots of the chats, the person circulating the photos was one Yixian.

A police report was also made.

The spokesperson also noted that the temporary employee was engaged through an employment agency to support additional manpower needs for temperature screening and contact tracing.

“We have also reminded all our temporary staff at our stores currently manning our temperature checks and contact tracing stations that such behaviour will be dealt with quickly and where necessary, with legal action,” said the spokesperson.

Netizens commented asking for the person to be arrested and for the police to look into the matter.