TCASH CEO Danu Wicaksana: We were just getting started 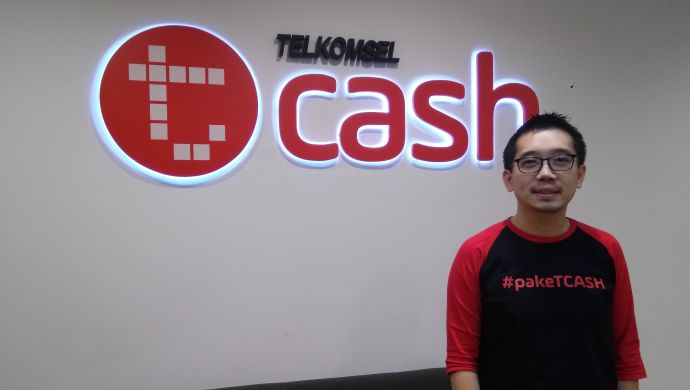 Of all cashless payments services available in Indonesia today, TCASH stands out as one of the most widely used, in addition to ride-hailing giant Go-Jek’s Go-Pay.

Starting off as an NFC-based e-wallet service belonging to state-owned mobile operator Telkomsel, TCASH has undergone several changes in the past year. Using its new QR code-based system, it has begun to be available for users of other mobile operators through its mobile app.

According to CEO and SVP Mobile Financial Services Danu Wicaksana, this is the most important milestone that the company has made so far.

“Before we turn agnostic, there is a perception that TCASH is available exclusively for Telkomsel users. The launch had come off as a surprise for some people … I think it is definitely a statement,” he told e27 in an interview.

The platform has also seen the number of its users increasing for up to 10 times within the last one year.

“We still have a long way to go; we were just getting started, actually,” Wicaksana says.

“Right now we are working in the payments sector and it is actually just a start for us. It is a mean to an end, and the end is financial inclusion,” he continues.

The platform has secured partnership with local banks such as BTPN to reach out to its users in rural Indonesia, where it is available in the form of USSD codes for feature phone users.

In the long run, TCASH aims to bridge financial services such as lending and savings for these users.

In this interview, Wicaksana shares his insights about competition in Indonesia’s cashless payments sector and how he dealt with transitioning from running a startup to a state-owned enterprise.

Here is an edited excerpt of the interview.

Do you see Go-Pay and OVO as your competitors? What is your strategy in battling them?

I’m going to start by answering the first question first: We see them as fellow fighters.

The hardest struggle in Indonesia is in fighting the use of cash. Not only in small cities, even in big cities Jakarta we always have a pile of cash inside our wallet, just in case.

First and foremost, we need to prepare the infrastructure for people to migrate to. Secondly, we need to educate people to be comfortable with no cash. So the common enemy for us is cash.

When it comes to positioning, we were born out of the telco industry. We are a part of Telkomsel which is available widely throughout Indonesia.

We are in a space where they [Go-Jek and Grab] are not operating in yet.

It makes sense for them to begin operations in Jakarta, because of the city’s congestion problem. They have already built their own ecosystem and it will be impossible for us to compete by launch TRIDE, for example. So we need to find another angle, and there is a great possible that it lies outside of Jakarta. It is important for us to be available in Jakarta, but we cannot stay there forever.

So our positioning is in how we convert Telkomsel users to become TCASH users.

What do you think is the reason behind Indonesians’ dependency on cash?

I don’t want to blame anyone but I think it’s a problem that began with low penetration of banking services.

When I was working in a consultancy, we did a project with the government to study financial inclusion … and I learned that cash circulation is actually very costly here, with the country being an archipelago of 17,000 islands. For banks to open branches everywhere and cater to everyone’s needs, it is very costly. So banks are centered in areas where they have the possibilities to make profit.

Even in big cities, the public learned that for transactions in smaller merchants, there is no other option but cash. So for players like us and Go-Pay, there is an expectation to build the infrastructure.

There are also other factors such as the fact that most e-money system on e-commerce sites are closed loop … This makes people hesitant to use e-money because “What if I can’t get my money back?” There is a demand for flexibility.

How does one convince potential users that e-money is safe and convenient to use?

Same as in e-commerce: I think we have been making plenty of promotions that users might never really need. We indulge customers with promotions though deep down we now we cannot do it forever.

It is true that we still have to rely on promotions to lure new users … but we [industry players] need to be more meticulous in figuring out our strategy.

Also Read: Indonesia’s love affair with ojek is turning into a marriage

Prior to joining TCASH, you were the managing director of fashion e-commerce startup Berrybenka. What encouraged you to move to a state-owned enterprise?

I had a really good time [working with Berrybenka co-founder] Jason [Lamuda] and team. But over time I learned that there are many pain points in Indonesian e-commerce industry, including payments.

Cash-on-delivery, it is indeed very costly and painful to handle. So I thought, what can we do to ensure that in the next 10 years, people in rural areas can buy clothes and pay for it using a safe and convenient method?

Back when I was working at McKinsey, we had a study with the government … that concludes that Indonesians are not investing enough money.

So when this opportunity comes in, I just had to take it. Especially considering Telkomsel’s reach at 150 million plus [users] … there is definitely a great opportunity here. That’s why I decided to move on from Berrybenka.

What are the most valuable skills and insights that you have learned in Berrybenka, that is applicable in this business?

People often wonder, “Why did you move from startups to state-owned enterprise? Aren’t you going to be stressed?” There are definitely plus and minus of working in these two worlds. Back in Berrybenka, everything was all up to us. But every four to six months we need to start preparing pitch decks for fundraising.

At the end of the day, it’s about making things happen. For example, working hours. I give the employees the freedom to choose as everyone has their own preference, when they feel most productive. So instead of focusing on their weaknesses, we focus on their strengths.

We also combine youngsters and seasoned executives in this team. We have 150 employees; half of them are from Telkomsel, while the other half are from outside, including myself. There is a process of acculturation and my experience in Berrybenka helps a lot.

Last but not least, running a fashion e-commerce company has helped to me get an understanding of what investors want. Meanwhile, here at TCASH, our investors may not necessarily have the VC mindset. In a way, we are also educating them about startup world, the matrix used by VCs, and so on.

We are still under Telkomsel legally but the way we are being run is more agile.

What about that spin-off plan then?

It is not being cancelled, it is being delayed. The thinking behind it is that TCASH needs to maximise all of the resources that Telkomsel owned.

The post TCASH CEO Danu Wicaksana: We were just getting started appeared first on e27.